Alimatek, alimanawang, limatek or linta is a small leech usually has a measurement of 1-3 cms. long. This is a haemophagic parasitic mountain leech under the class Hirudinea. It is a carnivorous or bloodsucking freshwater annelid worm that has typically a flattened lanceolate segmented body with a sucker at each end. It usually comes in black or brown colors. 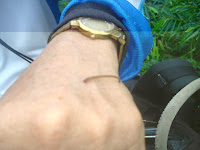 On our climb to Mount Bulusan, most of us became victims of this leech locally called alimatek. I for one had a share of this kind. Several alimatek got into my skin while trekking. It was raining frequently during our ascent, so it was expected that they cling into the ends of the leaves of trees. We were advised to push aside the leaves to rid them. However, even how carefully you avoid them they still cleverly get into our boots and make way to the exposed skin of our bodies.

In fact, two people from our group were serious victims of this alimatek. They penetrated into their eyes. Physician Tina and guide Alvin suffered from the discomfort in their eyes caused by this creature. They both felt itchy. They just let it stayed in their eyes for a while but they could not stand it overnight because it will suck blood so I watched the removal of the alimatek from the eye of Alvin. They used hair forcep or tweezer. Initial attempt failed because its body was slimy and one end sucked strongly in the eyeball. They have thought of irritating it by putting soap. Then it was successfully removed at the second attempt.


In the case of Tina I helped in the removal by rubbing soap in the leech with the use of a cotton bud. Joel pinched it with the tweezer while Kuya Ike assisted us. So we were successful and she was relieved.

Alimatek should not be scared of if it landed in your body because they just bite and suck a little of blood. Most of the time, you won’t even notice or feel them. But a spray of alcohol would dislodge or disengage them. Never ever pull them off by force because their suckers might be left attached to the skin better yet just leave it until it falls.
Posted by Edwin Antonio at 5:24 PM