With a couple of guest friends, we went to Paoay on All Saint’s Day to join other friends who were invited to judge the event called Tumba. This was my second time to witness this event. Tumba is a Halloween cultural tradition of the town of Paoay. It was celebrated for more than 20 years now which started just a simple showcase of celebration of Halloween in the community then later made into a contest. 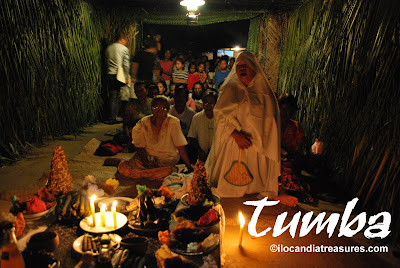 Tumba refers to a catafalque. It is a platform that is used to support a coffin or casket during the wake of a deceased person. It also refers to a tomb or an altar. It is the practice of the Ilocanos to place in an altar the religious icons, especially the crucifix, patron Saint Augustine and other images. They also include to display the framed sepia portraits of their departed loved ones with candles, flowers and umras. Umras is a group of food that is being offered to the spirits. There were incantations and prayers conducted by the people of each village. Dung-aw or crying with monolugue was also performed by some ladies. 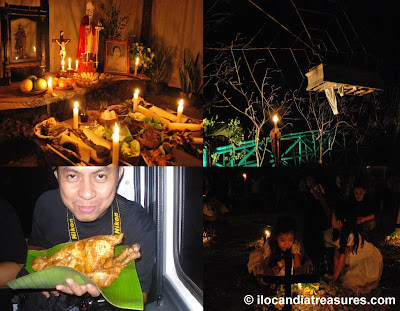 There were a total of 31 entries representing each village of the said town. They were far apart from each other so we have to hop from one place to another with the use of the municipal vehicle. We spent more than five hours to visit the tumba entries. I was lucky this time that I have seen majority of the entries and I was amazed by the big effort exerted by the locals to put up their entries. Fabulous and horrifying production sets were prepared. Aside from the altar they made, they accented them with horror unit with purgatory, hell and heaven. Some even hired limousine or caro, coffin with a shocking character inside.

They cooked food to offer in the tumba consisted of sinuman, pilais, busi, arrozcaldo, lechon, roasted chicken, different variety of grilled fish, boiled eggs and many others. I took fruits, suman and one whole roasted chicken since guests are allowed to take away some of the food displayed. After the guests partook in the eating, the community follows.

The barangays of Pannaratan, Sideq, Pasil, Nagbacalan and Monte were the top five entries who made such a wonderful presentation of tumba. This is such a unique tradition witnessed only in Paoay and a must-see for everyone.
Posted by Edwin Antonio at 8:19 AM