On my second day in Hawaii, Mang Edna sent me off to the airport for my early morning flight to Kahului, island of Maui. It was only a 30-minute flight via Hawaiian airlines. My host was referred by my friend Fanny. Manong Billy Jose is her father. I was instructed to wait for him at the lobby. She gave me the plate number of his car which is colored green. When I saw this, I just waved my hand and boarded the car. We greeted each other. He treated me for breakfast at Zippys and later dropped by at his workplace which caters food to various airlines in America. 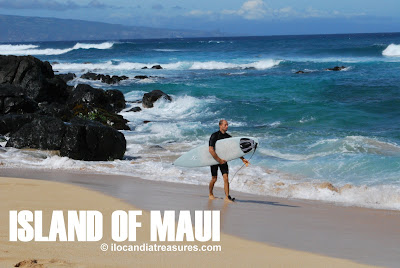 Maui is an island of the state of Hawaii which is the second largest in terms of size with an area of 727.2 square miles. It is called Valley Isle attributed to the large isthmus between its northwestern and southeastern volcanoes. The popular term Maui and Son traced back from the legendary discovery of the Hawaiian island, a Polynesian navigator, Hawaiʻiloa. He named the island after his son’s name.

Starting from the airport alone I felt that the air in Maui was so gentle, breezy and cool compared to that of Honolulu. I enjoyed my joyride. It’s so green in this island. There were lots of golf courses. We began roaming around the island with a visit to Paia located on Maui’s North Shore where we have seen the beautiful white sand beaches. Surfing on long boards were plenty on this area. We were lucky to have seen a monk seal resting and moving in the sand. It was cordoned for safety. Then our next stop was at Naska where we watched several people assemble and do kite boarding. On the other side was windsurfing. While enjoying the beach sports, we ate our packed lunch bought from the resto. 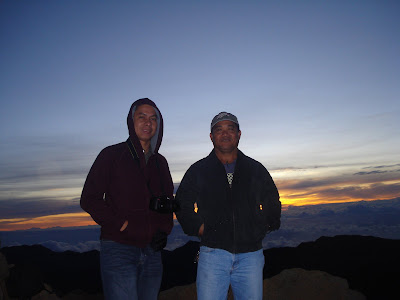 We moved to Central Maui where we visited Maalaea Harbor. This hosts marina where cruise ships and pleasure boats dock here. This is also an excellent site for surfing and windsurfing. It is also an ideal walking beach. We concluded our day with our visit to Kaanapali, a small town located in the western shore of Maui close to Lanai. Mang Billy shopped for me some clothes to wear and even jacket to use. Another perk was the Aloha money.

I was taken home and introduced to his family starting from his parents who were so amiable and began to talk to me. I met also his brothers and especially his daughter Charise. We dined together for supper and we had a bottle of beer and later had sing- along. We retired early and rose up wee hours of the morning.

At 4:30am, we rushed to the Haleakala National Park to see the beautiful sunrise and of course the crater. It has an elevation of 10,000 feet. I was surprised to see that there were already many people waiting. It felt freezing cold up there. I keept my hands inside my pocket to ward off the freezing chill. It was a wonderful sight.

We droved down the scenic 53-mile Hana highway with all that lush rainforest following the northeast coastline. It is one of the most beautiful drives of the world. There were sharp curves that limits you to only 15 mph speed limit. We ended up to Waianapanapa State Beach, a black sand beach. 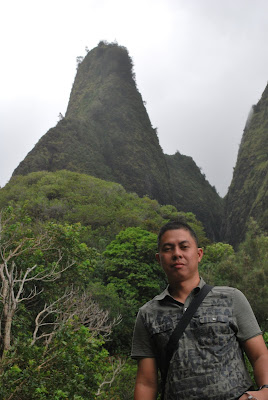 We stopped by at the Garden of Eden where we saw several plants and flowers. There were birds here. We bought our pack lunch from Queen Kahuumano Center where Charise works. We proceeded to Iao Valley where we saw the Heritage Parks composed of many styles of home. including bahay kubo. We have seen the striking Iao Valley needlle, a 2,250 feet rock pinnacle.

The island of Maui is simply the best in terms of nature tripping. Fabulous sights and great people I have seen. We went home to rest and had video conference with his wife and children Fanny and Kevin and friend Mai. Afterwards, they sent me off to the airport bound for Honolulu. I thanked him and his family for that unforgettable moments.
Posted by Edwin Antonio at 7:17 AM