Nakem Conference at the University of Hawaii

The 4th Nakem International Conference was held at the University of Hawaii at Manoa Art Auditorium and Campus Center Ballroom with the theme Dap-ayan: Sharing and Understanding Ethnolinguistic Worlds Towards Cultural Pluralism. 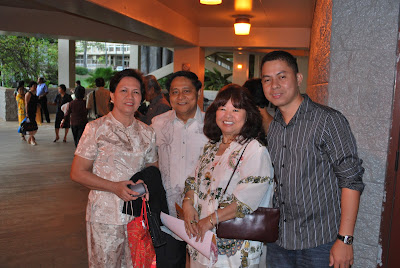 During the opening reception, I was accompanied by my host Mr. Juny La Putt and introduced me to his friend Dr. Federico Magdalena, a professor from the same university. I met the different delegates from the Philippines, USA, Australia and Hawaii. I have seen Dr. Ariel Agcaoili, Executive Director of the conference, Dr. Patricia Brown, President of the Filipino American Historical Society of Hawaii, Dr. Miriam Pascua and Dr. Alegria Visaya of Ilocos Norte. I met again Golden Miss Teen Hawaii-Filipina Alyssa who graced the event with her mom Mrs Agnes Reyes.

National anthems of USA and the Philippines in Ilocano version were sang during the opening. Welcome remarks were delivered by key personalities. It was followed by poetry reading, folk dance from Hawaii and Philippines, classical Ilokano songs, and three Ilocano books were launched during the program. 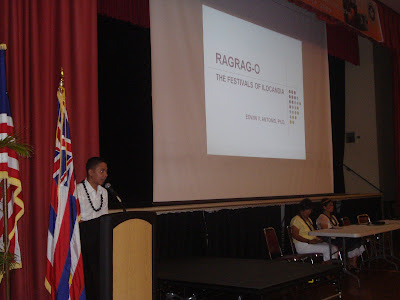 On the second day, I put up the photo exhibit entitled Gameng: Ilocos Treasure Goes to Hawaii. Several Ilocano personalities’ lives such as that of Jose Burgos, Gregorio Aglipay, Isabelo de los Reyes, and Jose Maria Sison were discussed. Various papers on Ilocano culture were presented. There was a student volunteer by the name Valerie who came up to me and asked me if I am Edwin Antonio of Treasures of Ilocandia and I said, "Yes! And why?" She excitedly responded by saying, "Manong, we've been using your blog on our presentations in class." I was elated by what she said and even their Professor Julius Soria confirmed this. The university actually offers a program on Bachelor of Arts major in Ilocano Studies.

On the third day, I presented a paper entitled Ragrag-o: The Festivals of Ilokandia where I showcased all the festivals I covered in Ilocos Norte as well as in Ilocos Sur.
Posted by Edwin Antonio at 7:51 PM