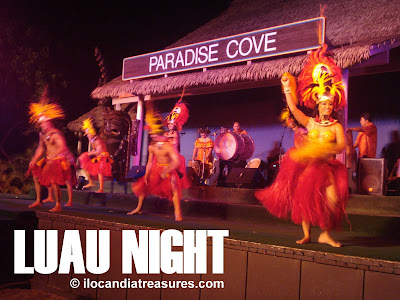 They took me first for lunch at Kentucky Fried Chicken and visited Ala Moana mall. Salvador shopped for me some macadamia chocolates and kona coffee at the Longs Drugstores. Then went to see Aprille’s hubby to endorse her baby and we later proceeded to Paradise Cove.

Luau is a Hawaiin feast. The concept of Luau and party are always synonymous. So in every occasion luau can be affixed with it such as graduation luaus, wedding luaus and birthday luaus. The term dates back in 1856 when it was used by Pacific Commercial Advertiser. It comes from the food always served that is young taro tops baked in coconut milk and octopus or chicken. The former name of the feast is called paina or ahaaina. 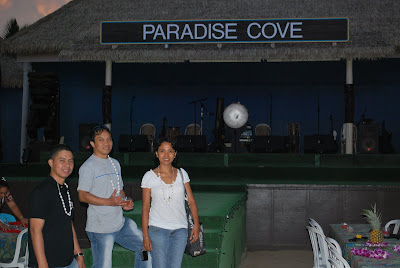 Aprille registered and paid the ticket at the gate office. It was around USD80 per person. We were welcomed with lei made of shells, then we were given welcome cocktail drinks. We roamed around first, then watched some ceremonies such as the Hukilau on the Beach and the audience participated in traditional Hawaiian fishing and the Royal Court Procession with Imu Ceremony. They demonstrated cooking Kalua pig which it had to be buried underground to cook it. 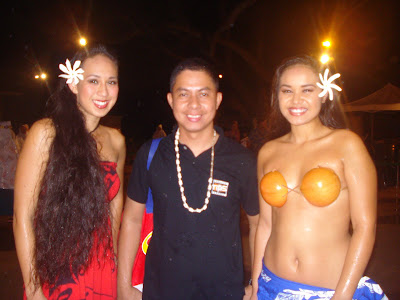 We ordered alcoholic drinks and I had Hawaiian Blue. A buffet dinner was served consisted of Hawaiin food such as Kalua roast pig, poke ahi, poi and other continental food. While having our dinner, the Polynesian cultural show was started. We were given poncho before the show and that was for the rain.

It started to drizzle then it rained hard while the fire dance was ongoing. People cannot brave the rain so they ran for shelter. My enjoyment of watching the cultural performance was cut short by the rain. The people started to go home and we went home too. I dropped by at Aprille’s house where Mang Edna picked me up. It was a wonderful night sharing with my two long lost friends.
Posted by Edwin Antonio at 9:20 PM