After coming from Maui, I called up Mr. Juny La Putt on his phone as per his instruction, so that he could pick me up at the airport. I met Sir Juny on the internet a few weeks before I traveled to Honolulu through his website, Hawaiian webmaster. He is so very kind. Even not knowing me that well, he welcomed me in his home. 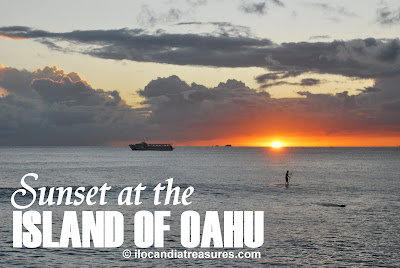 After meeting him at the airport, he took me straight to his house in Ewa Beach and showed me my room and the different corners of the house. He instructed me on how to open the internet, how to use the coffee maker, even lent me his magic jack to call my friends in the US and Canada and even gave me the house keys. He lives in an apartment with his wife Nena, who works as a nurse.

I was left alone in the house. I had a restful night. The following morning, my host took me for breakfast at McDonalds and later brought me around Oahu. He described to me the Oahu island. It is composed of two sections, the Windward (the higher side) which is the greener part and that it always rains there. The lower side called Leeward is brown and dry. 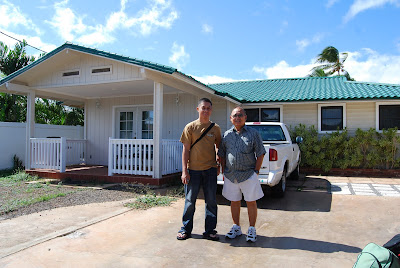 Oahu is known as The Gathering Place. It is the most populous island in the State of Hawaii and the third largest in Hawaiian islands with a total land area of 596.7 square miles. Honolulu as the state capital is located in its southeast coast. Waipahu is a former sugar plantation town in Oahu where many Ilocanos reside. I have seen every home waving the Ilocano flag called horseradish, malunggay plant or moringa tree as they say. Ilocano migration in Hawaii is attributed to the Sacadas who worked in the sugar and pineapple plantation.

Our first stop was a visit to the National Cemetery of the Pacific which serves as a memorial to the men and women who worked in the US Armed Forces. It is where I have seen the Philippine map and Leyte in which the country was involved in the World War II. A rock from the Malinta Tunnel was brought by President Arroyo to serve as a memorial to the partnership of US and Philippines. This cemetery is located in the Punchbowl Crater where there was a deck where you can view the Pacific Ocean and the Honolulu skyline and the volcanic tuff cone called Diamond Head. It was a spectacular sight.

Later, we went to the Philippine Consulate and visited his friend Consul Lolita Capco. I was introduced to her and had a little chat. Then, we proceeded to the Nuuanu Pali State Park or the Pali Lookout where I have seen the panoramic views of the green hills and mountains especially the Koolau Range. 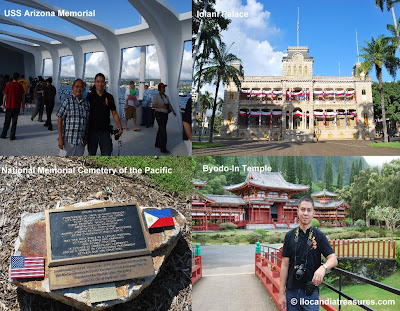 We headed next to the Valley of the Temples Memorial Park which features the replica of 12th century Japanese Buddhist temple in Kyoto called Byodo-In Temple. We walked through the entrance bridge and I rang the peace bell before paying my respect to the image of Buddha. Aside from Filipinos, Japanese people have a big population also in Hawaii.

The highlight of the day was a visit to the USS Arizona Memorial located at the Pearl Harbor. They gave out free tickets to watch a documentary film about USS Arizona and a ferry ride to the main site of the resting place of the 1,102 sailors who were killed during the Attack on Pearl Harbor in 1941 by Japanese Imperial forces. This led to the involvement of US in World War II. This was a very educational trip to the site since I learned a lot from the past of America.

We dropped by at Iolani Palace, the official residence of two monarchs of Hawaiian Kingdom. It was built by King Kalakaua in 1882. At its opposite side was the Aliiolani Hale, the home of the Hawaii State Supreme Court, where the gold-leaf statue of Kamehameha the Great was erected in front of the courtyard.

To cap the day, we relaxed at the Ala Moana Beach Park where we watched the sun sets. On the following day we visited the PT Clinic of his friend, Janice Magdalena. I was also brought to his apartment and stayed there since its nearer to the University of Hawaii at Manoa, the venue of my conference. He sent me off and even joined me at the opening ceremony.

I am so very lucky to have met Mr. Juny. He is a retired military man and a professor. These days, it is very rare that you meet a person who is trusting. I learned from him that he also went through traveling finding some generous hosts and foster families. My sincere gratitude goes to him for this wonderful homestay.
Posted by Edwin Antonio at 6:07 PM