The photo exhibit entitled Gameng: Ilocos Treasure Goes to Hawaii presented by The Ilocandia Photographic Society (TIPS) at the University of Hawaii at Manoa in Honolulu, USA during the 4th Nakem International Conference was a big success. 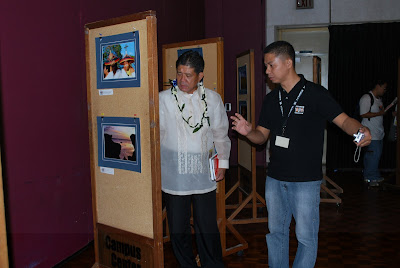 At the opening ceremony, I presented to the delegation the video sneak preview of the exhibit and most of them were amazed to see the beautiful photos from Ilocandia. The collection of photos exhibited were representative of Ilocandia’s natural wonders and the rich Ilocano cultures and traditions.

The photo exhibit was viewed by the conference delegation, administration, staff and students of the University of Hawaii. Consul General Leoncio Cardenas had viewed the photos as well and was attracted to the photos. He bought two photos from the exhibit. Besides the praises to the photo exhibit, 50% of the photos displayed were sold out.
Posted by Edwin Antonio at 8:35 PM