I thought it was a just a short trip flying from Manila to Honolulu but it was a long haul flight. It was 10 hours. Aside from getting the lowest promo fare, I had so much comfort in flying the Philippine Airlines because of good service and I was able to lie down and sleep on a row of four vacant seats at the back near the galley. 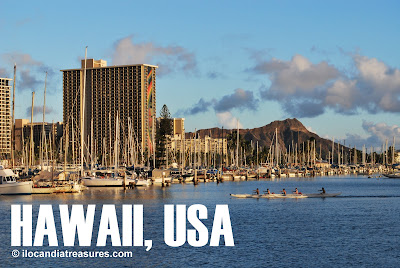 Hawaii is the 50th state of the United States of America and the only state composed of island chain. It is composed of eight main islands namely, Ni’ihau, Kaua’i, O’ahu, Moloka’i, Lana’i, Kaho’olawe, Maui, and Hawai’i. It was a former kingdom from 1810 to 1893 until when resident American businessmen overthrown the monarchy and later became an independent republic. It was annexed to US as territory and became its state in 1959.

Upon arrival at the airport I saw many well-wishers armed with different types of leis or garlands waiting for their guests. I waited for a while for my hosts to arrive. Suddenly they showed up. Manang Edna Tamayo and sister Mary Ann greeted me with a lei. I was amazed by the warm welcome. She drove the car to a place where we met up with Manang Agnes Reyes to deliver packages for her. Upon handing out the package to her she gave me an envelope and that was Aloha money, as they say. 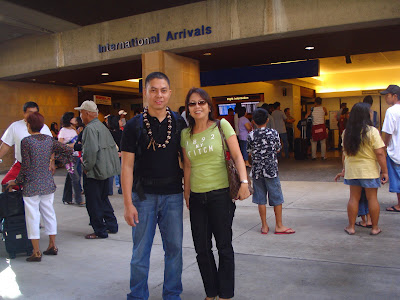 Manang Edna took me at once for shopping to an outlet. She asked me to pick something I like. I chose a T-shirt and she paid it for me. Again I was surprised. Later, she took me to her house where some guests from Maui were waiting for her. I was introduced to them and had talks. I met also her children Eric, Patrick and Kaycee. Before her guests left, they shook my hands with some cash and that was Aloha money. Wow, it was really surprising.

With her hubby Manong Primo, they took me out for lunch at a Chinese resto. They served a big pack of lunch where you get to choose a combination of viands. Sodas were of great sizes too. Later, we went to the office of Mang Edna for her to work a bit because her desk was piled up with papers as she just arrived from vacation in the Philippines.

Manong Ben Pulido, president of the Kalayaan Philippines group of Ilocanos in Hawaii with her daughters Vanessa and Raizza dropped by to get their pawit or package from me. I was introduced to him and upon getting it, he handed me some cash. I was so much delighted by their generosity. I started counting my collection when we went home. 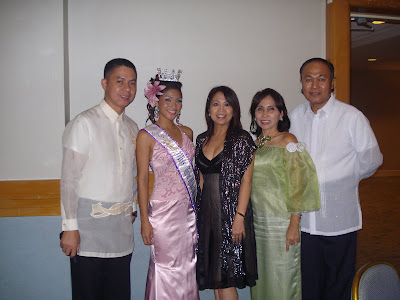 We were invited to attend the Kimona Ball of the Filipino Business Women in Hawaii at the Ala Moana Hotel. I was lucky that Mang Ben informed the emcee to announce the photo exhibit I am holding at the University of Hawaii. I met the daughter of Mang Agnes, Alyssa, reigning Golden Miss Teen Hawaii-Filipina 2009. I met many people. There was also one person who gave me Aloha money.

Later we met up with Mary Ann and friends Tess, Rely, Lorie, Vi, Chil, Kenny, and Edita at Sorabowl where we had dinner. They took me to Club 939 for some adult entertainment and we ended our night out late with some hot noodles at Zippys and retired at the house of Edita. 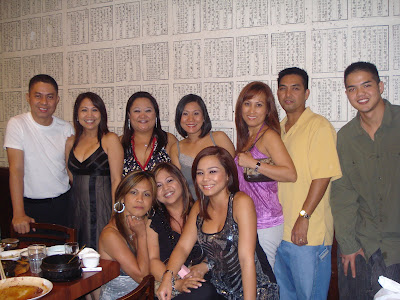 A big surprise given to me was when they tendered an Aloha party for me at the family house of my host in one of my nights in Oahu. Aside from the Filipino food, they prepared ocean salad and poke ahi. Mang Edna arranged the party with Mary Ann celebrating her birthday too. Most of the relatives and friends gave me each an envelope containing Aloha money.

On my last night, Mang Ben threw a farewell dinner for me at the Aloha Tower Marketplace where we had a buffet of seafood. I love that Snow Russian crabs and lobsters. Together with Mang Ed and Mang Agnes, we proceeded to Walmart. Each of them shopped for me boxes of Macadamia chocolates, souvenir shirts and whatnot to take home.

When Mang Edna sent me off to the airport, she handed some more cash gift. I sincerely conveyed to her my utmost appreciation for her kindness in making my Aloha experience a great memory and a treasure to cherish for lifetime.

Posted by Edwin Antonio at 9:19 PM