The Ilocandia Photographic Society (TIPS) is holding a photo exhibit entitled “Ladawan ti Kailokuan” (Images of Ilocos) upon the invitation of the Mariano Marcos State University (MMSU) in Batac, Ilocos Norte during the launch of the Center for Ilocano-Amianan Studies on September 29, 2009 at the University Library. The exhibit runs until October 9, 2009. 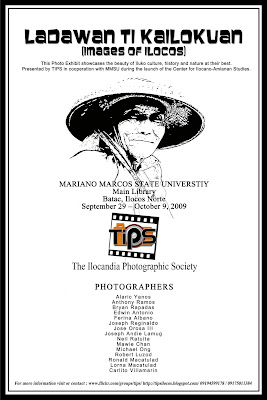 This project aims to promote the Ilocano culture and heritage. The exhibit showcases the beauty of Iloku culure, history and nature at their best. Photograps composed of the world heritage Paoay Church, Vigan Heritage Village, Bantay bridge, Pangil Rocks in Currimao, Pagudpud Beach, Guling-guling Festival, and many others. My photos on exhibit were Daklis, Dapil, Kalap, and other Tagnawa photos. 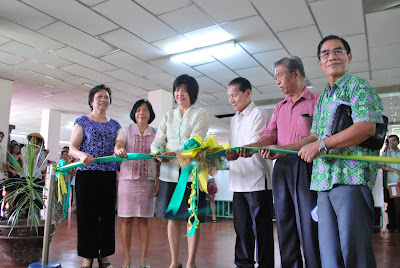 University President Miriam Pascua cut the ceremonial ribbon to signify the opening of the photo exhibit to the public. It was attended by students, faculty members and administrative staff of the university, delegation from Ilocos Norte National High School – School for the Arts, Northern Christian College, Ilocano writers from Gumil and Bannawag and other guests. 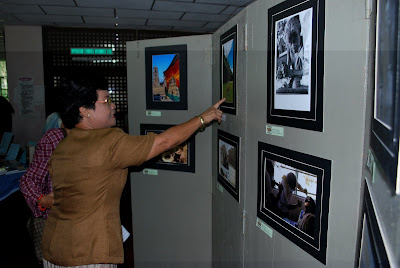 It was followed by rendition of cultural performances such as kanta, dueto, dallot, suelto, daniw by select students and faculty. Messages were heard from the Dr. Pascua and Dr Alegria Visaya.
Posted by Edwin Antonio at 2:15 AM