The commemoration of Marcos Day was held today at the town of Sarrat. This is the first time it was held there as it had been previously in Laoag or Batac. This is the 92nd Birth Anniversary of the late President Ferdinand Edralin Marcos whom the people of Ilocos Norte consider as the illustrious son. Sarrat is the birthplace of Marcos and their family house was converted now into a museum. 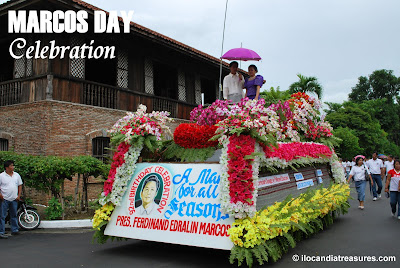 Ferdinand Marcos was born on September 11, 1917 who became the 10th President of the Philippines. He was a lawyer and a war veteran. He became a member of the Philippine House of Representatives and the Philippine Senate. He had served the country the longest time for 20 years and was ousted from office by the People Power Revolution in 1986 due to corruption and dictatorship as he imposed Martial Law in 1972. He was exiled in Hawaii and died there of an illness on September 28, 1989 and reported that his body still lies at the Marcos Mausoleum in Batac. Even though it was raining, my colleague Alaric and I braved it and covered the event. We started at the Santa Monica Church where a Mass was celebrated. We had seen the entire family composed of the children, Imee Marcos, Irene Marcos-Araneta, Congressman Bongbong Marcos, who even celebrated his birthday today, and the widow, former First Lady Imelda Marcos. We have seen her giving cash gift to the group of sacristans at the church.

Later, a parade was held where each town’s delegation participated in. There were a few floats seen and a dance parade by a group of young local dancers depicting an occupational dance of planting tomatoes. There were speeches delivered by Mayor Balintona and Governor Michael Marcos Keon and they remembered the life and legacy of Ferdinand Marcos.
Posted by Edwin Antonio at 1:06 AM