Two years ago, my mom and I went to Taiwan for a short visit. I was able to get a promotional fare from Cebu Pacific airlines. We applied for a visit visa to Taiwan embassy from which we did not have to personally appear. I asked a friend to submit our documents on our behalf. We were given 14 days but we only spent 4 days. We landed at Taiwan Taoyuan International Airport and took a one hour bus trip to Taipei downtown where my sister-in-law Myrna met us. We checked in at a family hostel and rested for a while and got started with our stroll. 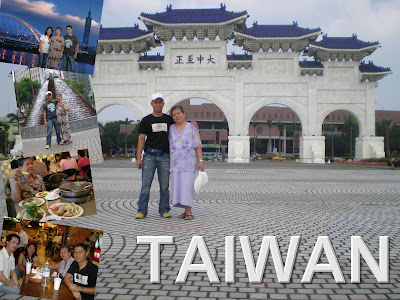 Taiwan is an island group that is governed by the Republic of China. Its former name called Formosa is a Portuguese name. Formosa literally means beautiful island. Its capital is the city of Taipei. Taiwan is being claimed by the People’s Republic of China since it was established in 1949 in the mainland and considers itself as the successor state of ROC.

We visited the landmark of Taiwan that is the National Chiang Kai-shek Memorial Hall. This a monument erected in honor of the former President of the Republic of China. This is surrounded by parks, a ceremonial gateway and the statue of President Chiang Kai-shek. Then later we went for a spa and jacussi at JJ sports center just across Chang Kai Shek. Everyone was required to wear bathing cap when using the pool. There is also a gym, courts and a Seattle coffee store here. We were refreshed after the dip. 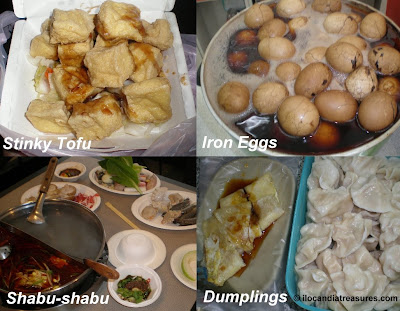 We went around Ximending downtown for shopping some souvenirs. For lunch, we went to MK Restaurant for that sumptuous and popular shabu-shabu where we enjoyed it so much. There was a wide array of choices of meats, seafoods and vegetables. There were a lot of customers in this resto.

Da’an Park is a forest park and went around this area. We bought some food with us such as the glutinous rice tamales with meat and other fillings and the notorious stinky tofu which I learned to love because it was yummy despite its smell. We also tried the popular drink pearl milk tea or bubble tea which was made with flour balls and aromatic milk tea. This is a unique Taiwan invention now available anywhere else in the world.

We met up with my brother-in-law Nestor at the Taipei Railway Station and treated us for lunch at Shinoya Restaurant.

A visit to Taipei 101 was the highlight of our trip. My mom was reluctant to get up to the observatory but I was able to convince her to see what was up there. Later that day we had a dinner of cow viscera soup and noodles at the market and a friend gifted us with mooncake, a traditional food served during the mid-autumn festival.
Posted by Edwin Antonio at 1:05 AM