Finally I got hold of my brand new passport last Friday. I traveled again back to Manila to pick it up after 10 working days from my application. I just made an appointment on the website of Foreign Affairs Department at www.dfa.gov.ph. They replied with the schedule after a day or so. I printed out their email and brought along my old passport. One doesn’t need to queue, but go directly to gate 3 at the counter in charge of the e-passport. I paid P950 for the 44-page passport and submitted myself for the biometrics. 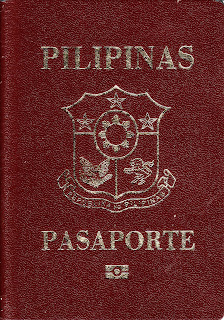 It’s a brand new passport because its now maroon passport and yet it’s electronic. This will make the country at par with developed countries. Bye now to the old green passport. The e-passport has a microchip. It’s also called a biometric passport since it will require photograph for facial recognition, finger scanning for fingerprint recognition, retinal scan for iris recognition and the digital signature of the applicant.

This is a modern technology to authenticate the identity of travelers. It uses a contactless smart card technology with the computer chip and antenna embedded either in front, center or back page of the passport. This is being used by the International Civil Aviation Organization for documentation. The said chip can easily be read by border control officials in other countries using passport chip reader.

On August 11, 2009, the first biometric passport was released for President Gloria Arroyo with serial number EA0000001 while I was given the 246th e-passport in the Philippines. I am happy to have it because I can fly again to the exciting destinations of the world.
Posted by Edwin Antonio at 3:12 AM