On my recent visit to the National Museum of American Indians in Washington DC, I witnessed the donning of traditional Mayan costume. Aside from demonstrating backstrap loom weaving, Guatemalan national Juanita Velasco also demonstrated to me how she wears her traditional costume specifically her headdress. 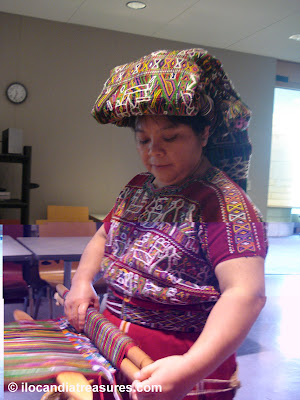 The costume of Highland Maya of Guatemala is undoubtedly the most colorful one in the Americas. They call their traditional dress as traje. Mayan traje is village-specific or language-group related. Thus it looks dazzling to see indigenous costume from dozens of Indian villages and 21 different Mayan ethnolinquistic groups.

One example of the towns is Nebaj and Juanita comes from this place. The town speaks Ixil language same with its two neighbor towns. The Nebaj woman’s costume is one of the most striking in Guatemala that had won awards in international pageant of traditional costume. A red skirt or corte, with yellow stripes, is being held up by a woven belt or faja. The traditional square-cut blouse called huipil is heavily decorated with embroidered designs. It is worn with an all-purpose shawl draped over one shoulder. The ensemble is topped with an elaborate headdress skillfully wrapped by Juanita into the hair as what she primarily demonstrated.

Posted by Edwin Antonio at 6:09 AM