Siwawer has become the trademark of the town of Vintar. It is a specie of aves that can be seen soaring and scouring at Vintar’s clear blue skies. This hawk is characterized by might and power as it spreads out its wings to go into unfamiliar territories. It is said that locals have been characterized with these traits and so this has become the main reason for celebration of the Siwawer Festival. This festival had been conceptualized and initiated with the aim of promoting the arts and culture, developing tourism, preserving the natural environment and conserving the heritage of Vintar. 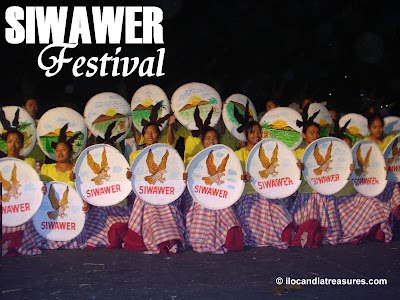 On its lqunching celebrauion they adopted the theme: “Talaguding ni Siwawer Pasantaken,” which means unleashing the power of the Siwawer. This was a tribute to the many great leaders and achievers who made their big mark on their chosen field of endeavor.

Vintar is a town located at the northeastern part of the province of Ilocos Norte. The townsfolk composed mostly of young ladies showed off their dancing skills imitating the prowess of a Siwawer. This performance was staged during the celebration of the Ragrag-o Festival of the province.
Posted by Edwin Antonio at 5:18 PM