Manzhouli: A Crossroad of Culture

It was a big surprise that we were flown from Beijing to Manzhouli City when I participated two years ago in a leadership program sponsored by the All China Youth Federation and we were taken around the city. It’s a city that takes you to a different dimension. Totally different from the impressions of traditional Chinese culture of Beijing. It is a crossroad of cultures since it lies in the borders of Mongolia and Russia. This is an autonomous region of China called Inner Mongolia where the Siberian train passes by from Beijing to Moscow. 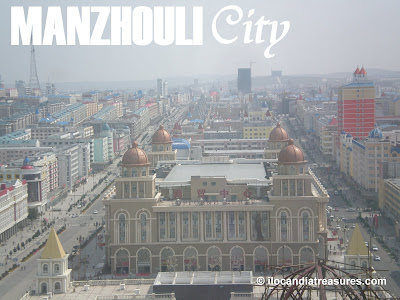 Manzhouli is the northern gateway to Russia. The name came from a Russian name Manchzhuriya. Just a few minutes to the north of the city is already Russia and a couple of hours to the west will take you to Mongolia. It is made up of vast meadowlands, deserts, acres and acres of forests towards the northern part of Inner Mongolia and mountains from one end of the province to the other.

The city was established in 1901 as a stop on the Trans-Manchurian Railway. It was built at the time as a shortcut between the main line of the Trans-Siberian Railway and Vladivostok, Russia. But now it is more like an international marketplace where Russians cross the border in search of cheap and portable items for selling back in their country.

Most Russians come into this city to trade and enjoy the lowest prices of products and services. The signages of most business establishments were both in Chinese and Russian characters . They do accept Russian money. Russians and other guests party all night long in the clubs around. The architecture is European and most buildings were patterned after it. Night market starts from 1am until late morning. I saw some Tibetans who sell their wares mostly indigenous products. Even Mongolians were around to offer their products. 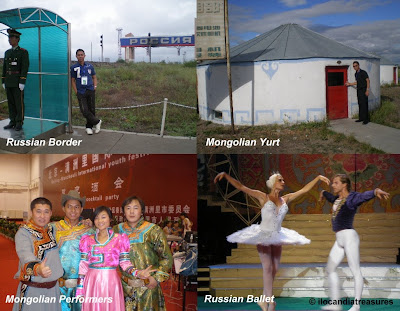 We have watched the Russian ballet performance in one of the theaters. Its an awesome performance to remember. Graceful movements of these tall Russian ladies and gentlemen were exhibited. There was one evening at the Diplomacy Hotel where they treated us for a dinner cum cultural show. It was a showcase of the music and dance of China, Russia and Mongolia. This was a fantastic show. I also remember that I tried to don Mongolian costume borrowed from one of the performers. There was also an open air cqncert where popular Chinese sinuers performed. ut was attended by a big crowd composed mostly of young people.

We were treated for another evening of cultural performances of Russian and Mongolian dances and Chinese acrobats and martial arts over a dinner at Grand Manzhouli Hotel where we were billeted.

We went to Dalai Lake and then to the Cha Gan Lake where the lake literally disappeared. Grasslands, gigantic elephant monuments and big rocks were all there to see. We visited Sino-Russain Border Museum and also to the Russian Art Museum where we have seen murals and other colorful paintings. Not to be missed were the Manzhouli Sculpture Park and the Russian Taowa Square where we saw the world’s largest Matryoshka Doll and giant Russian easter eggs. The Russian doll was a click among us guests to buy as souvenir. We shopped at International Commercial Center near the Russian border where you can bargain prices of the said item and others such as Chinggis Khan souvenir keyholders, sandals, stuff sheep toys, headdress, caps, fur coats, fur hats, vodka and many others.
Posted by Edwin Antonio at 1:03 AM