The Great Wall of China: Wonder of the World

Another site declared as one of the New Seven Wonders of the World on July 7, 2007 in Portugal was the Great Wall of China which is located in Beijing China. I am so fortunate to have seen this monument of architectural grandeur and of historical significance when I participated in an exchange program in China in 2007. 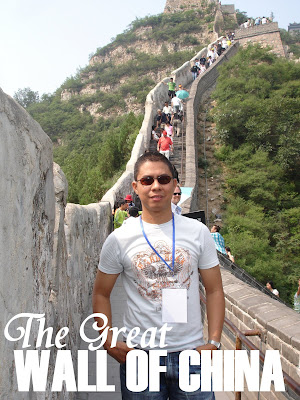 The Great Wall of China was built over 2,000 years ago. It is a series of stones and earthen fortifications built to protect the northern borders of the Chinese Empire from Xiongnu attacks during various successive dynasties. Armies were stationed along the wall to serve as first line of defense.

It is one of the largest construction projects ever completed and it stretches over 6400 kms approximately. This monument can be seen from the Earth’s orbit. Being one of the greatest wonders of the world, it was enlisted by UNESCO in the World Heritage in 1987

I left my camera in my hotel room when we visited this site so I did not have the chance to shoot a good angle of the Great Wall. Nevertheless with the cameras of my friends, I posed for a photo to this monument.
Posted by Edwin Antonio at 6:25 PM