When I visited the National Museum of American Indians in Washington DC, I chanced upon a native art demonstration. The museum showcased the Mayan backstrap loom weaving. It is being held Tuesdays, Wednesdays, Fridays and Saturdays at 10:30am -12:30pm and 2-4pm. Its free admission. 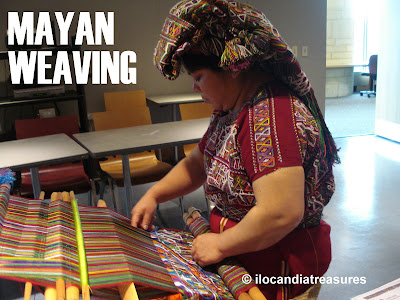 Juanita Velasco, a native Guatemalan specifically called Mayan who came from a small village of Nebaj was the weaver in charge who makes intricate and colorful Mayan textiles worn by the people in her village for everyday and ceremonial use. She even introduced herself as Sheba, her nickname. She was so kind and accommodating. I saw her without the headdress but she talked about it and later donned it for me to see. There were several steps of twirling and folding of the fabric until she fitted it on to her head. 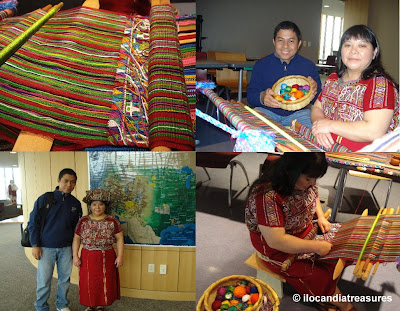 Weaving is a procedure where two distinct sets of yarns called the warp and the filling or weft are being interlaced to form a beautiful fabric. This is done with the use of a loom, a device or machine that ranges from hand-held frames to large mechanical device. In this case, Sheba used the backstrap loom in which she used a rigid heddle. The long warp threads were tied to a post and the other end was tied at a strap around her back. She also used a wide array of colors of threads for a much colorful designs. It was so educational to attend an activity like this.

Posted by Edwin Antonio at 6:29 PM