Feast of Mother of Perpetual Help

Last June 27, I was invited by Mai and Edwin of the Redemptorist Missionaries for a celebration of the Feast of the Mother of Perpetual Help held at Roieng in Laoag where the Little Chapel of the image is located. The icon is original copy which came all the way from Rome.

A mass was celebrated by Fr. Dennis and Fr. Melchor. We recited a novena. We sang Immaculate Mother and Mary Immaculate, Star of the Morning which I did not sing for a long time. Bro. Joel gave a speech regarding their mission to introduce the Lady of Perpetual Help to the people. He cited that every time they celebrate the feast, its always raining. 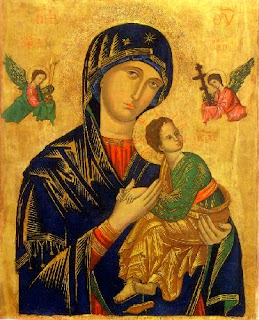 He also described the origin of the image. According to him, the image originated from the island of Crete. It was stolen and hid to his belongings by a merchant and sailed to Rome. They met a life-threatening storm at sea where they thought it was their end but they cried for help to Our Lady and safely arrived. The merchant fell ill and he requested second merchant to return the icon and confided it to his wife but refused to do so. The Virgin Mary appeared to the merchant’s daughter and requested that the icon be turned into a parish between St. Mary Major Basilica and St John Lateran. The wife turned it over to the Augustinian friars and transferred to San Matteo Church in Rome where it was venerated in the year 1499. I have seen and passed by San Matteo Church when I went to Rome in 2007 but I failed to enter since I only visited the two former churches.

A dinner followed after the mass. The celebration was attended by the people of Isi-isik and Cabayo of Vintar and the members of the clergy including Bishop Utleg who dropped by.
Posted by Edwin Antonio at 3:42 AM