Binatbatan Festival of the Arts is being held in the Heritage Village of Vigan. It is usually celebrated in the first week of the month of May. The festival’s name was taken from the Ilocano term batbatin which means separating the cotton balls from the seeds from the local fruit kapas sanglay. They use bamboo sticks to perform this process. The cotton balls are used in weaving the textile abel. Binatbatan became a folk dance and the Binatbatan street dancing and showdown was the very highlight of the festival. 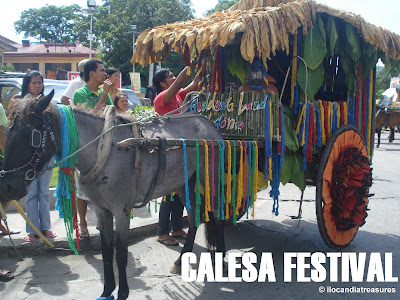 Calesa parade was also one of the events being conducted. Calesa is a tourism attraction in the city so annually they participate in showcasing their creative designs. There are more than 200 calesas in the city however, only 86 of them participated in the contest. Business establishments and organizations actually sponsor the decoration of each calesa. Decorations were so creative. They used indigenous materials such as the tobacco leaves, plants, corn, garlic, onions, and popular products empanada, longganiza, burnay and abel cloth. 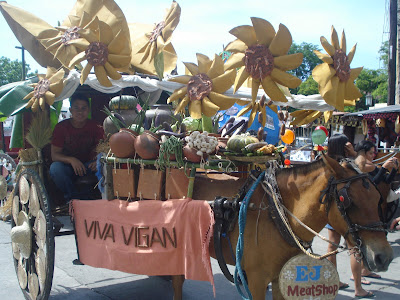 I had the chance to talk to some of the kutsero or calesa drivers. One of them was Lakay Santiago who is in the business for 30 years now. He remembers that the fare then was only 10 centavos whereas now its already 50 pesos. A fee of 150 per hour is being charged to visitor for an hour ride around the city and nearby towns.
Posted by Edwin Antonio at 4:27 PM

Thank you so much for the wonderful comments. I am flattered. Hope you continue visit this site.