The month of May is the time of festival celebrations in the Philippines. Most towns and even the barangays of the country celebrate its own fiesta. In Ilocos region alone, most festivals coincide with each other.
The City of Batac recently held its Farmer’s Festival to celebrate the contribution of the farmers to the community. We know for a fact that the main occupation in the region is farming. There were many livelihoods that a farmer is engaged into such as planting rice, garlic, corn, tobacco and others. The other one is raising different types of animals from the carabao that they use in tilling the land to the cows, pigs, chickens and many others that they sell or for their own consumption. 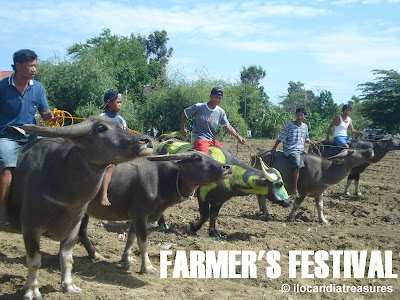 I had the chance to witness the different activities and games they set up for the celebration. Its so enjoyable to really see these traditional games and events. These were the carabao race, catching the piglet, catching the chicken, palo sebo, kadang kadang, carabao tug-of-war (pango) and the search for the best decorated carabao.

The event was held at the Government Center Complex. The different barangays fielded in their respective entries to the various categories. They started with kadang kadang with male farmers division and they were outdone by the women who spontaneously performed this game in their own division. There was no one who was able to get the prize at the palo sebo maybe because the bamboo pole was slippery with oil.

Another exciting event which everybody enjoyed was the carabao racing. There were five entries and they made one round of running. Two fell off from their carabaos and the other three successfully reached the finished line. There was a show of the unique and the best animals such as the huge rooster, goat with four offsprings, Brahman breed of cow with huge body and neck, and huge and clean carabao. 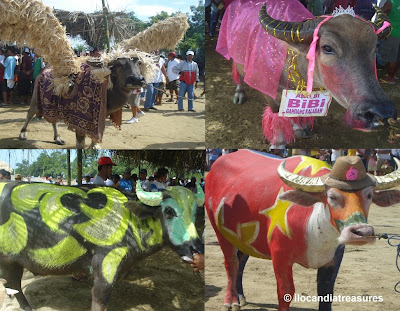 The catching of piglet and chicken were even more exciting. They had division for males, females and for the youth. They rumbled and stumbled to get the sole oiled piglet as they were sprayed with water by a fire truck. The piglet was the prize itself for the winner. There was also the tug of war of the carabao where it was just an exhibition since there were only two entries.

As the highlight of the event, I have seen the colorfully decorated carabaos. Some of the carabaos were body painted, some were dressed up like queens and the other accessorized with wings. They sashayed like models right before the audience and judges.
Posted by Edwin Antonio at 5:46 PM