I never expected that I will be climbing again another mountain this time. This was my second and it was such a great climb. It took us one hour to trek the Wayna Picchu or Huayna Picchu mountain from the base. This is another mountain in Peru that rises over Machu Picchu. Its name was taken from Quechuan language. It denotes Young Peak. We were able to reach its peak at 2,720 meters or 8, 900 feet above sea level. This Wayna Picchu is much higher than the Machu Picchu by 360 meters. According to local guides, this is the residence of the high priest and the local virgins. The high priest would go down to Machu Picchu to signal the coming of a new day. 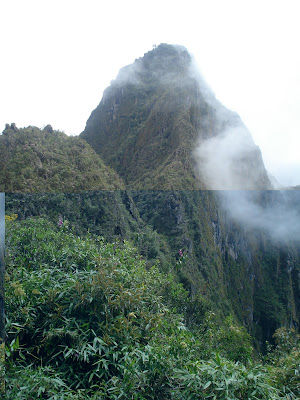 We waited for the 10 am schedule batch to climb the peak. We have to register in the logbook. As we began to ascend, we saw the more beautiful sight. We have seen the Urubamba river that rapidly flows. The entire view of the ruins can be seen from up here. The climb is steep and at times exposed. There were footpath, stairs and steel cables for support if its slippery. The high altitude makes you gasp for air. It’s kinda exhausting so I have to make several stops and rests along the trail. One can totally view the entire Machu Picchu from up above. It was such a wonderful sight. There was a narrow passage at the summit which was the cave that you have to go through. 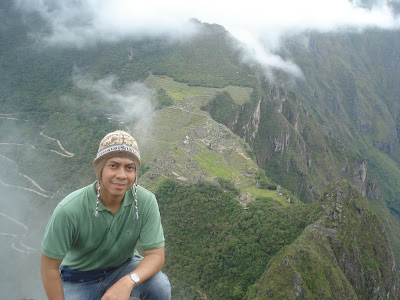 As I reached the peak, it felt like I am on the topmost part of the world. Wow, I ran out of words to really describe what I am seeing and experiencing. It got much cloudy as I approached the peak and it began to rain. We got wet and soaked. This did not dampen our mood.

At the summit, I met Rafa from Costa Rica who traveled alone to see this amazing site. Mariana of Argentina drew close to us and we had photo together. I initiated singing the birthday song to Mariana and everybody at the peak joined in singing. She was so happy for that. I admire her courage to celebrate her big day at the summit. 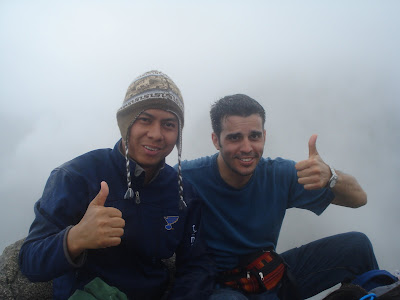 As we slowly descended the mountain, Philip, Mariana and me met the Argentinian people and tried their popular herba mate which they brought all the way from their country. We enjoyed jamming together for a short while. 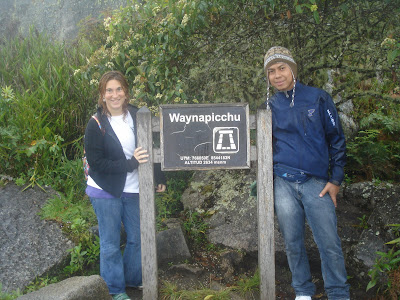 As a finale, the three of us went singing and dancing crazily with the Bulgarian music for us to celebrate our climb. We even sang Machu Picchu to that tune.
Posted by Edwin Antonio at 6:16 AM