On a Sunday, after hearing mass at the Basilica of the National Shrine of the Immaculate Conception in Washington, Andy with her friends Loida, Gay and Ate Malou took me to a trip to Mount Vernon. It is the mansion house of the first President of the United States George Washington which is located in Alexandria in the state of Virginia. This building was made of wood in a neoclassical Georgian style of architecture. This was built in the year 1757 and was declared as National Historical Landmark in 1960. 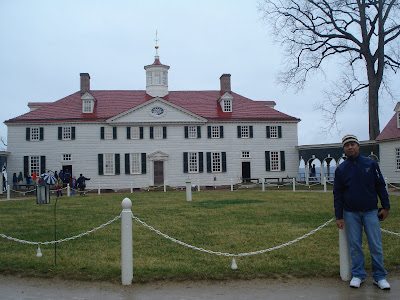 This beautiful estate of 8,000 acres was the product of tireless efforts of George who worked for 45 years expanding and improving the Mansion, outbuildings, extensive gardens and grounds. He visited this 15 times during his term of presidency. He even wrote that, “No estate in United America is more pleasantly situated than this...” 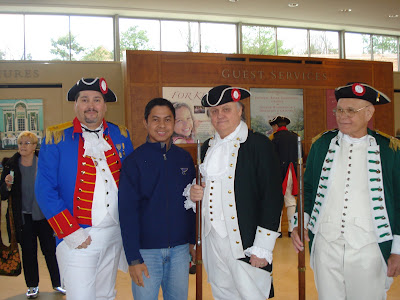 There is a fee of USD13 for the general admission of adult visitor and there is additional fee for the visit to the wine distillery. A separate reservation and fee is made for the National Treasures which we failed to make since its better done ahead of time. When we entered the reception building, there were some men in colonial costumes. We took photos with them.

There was a long queue of visitors waiting for their turn to get inside the mansion. It was even raining when we got to the line and we braved it. There was a group of Japanese people whom we met on the line. We toured around the house where we saw the dining place, the reception area and the master bedroom of George Washington where he died at. 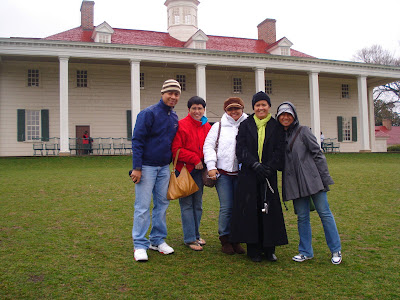 At the back of the mansion is the Potomac River. We spent a little time over here to shoot good photos. Andy and I went around and saw the slave quarters, the spinning room for textile weaving, the gardener’s house and the greenhouse where we watched the monologue of an actor who portrayed as physician of George Washington who explained the death of him which at the end made him cry. He made a wonderful performance.

A visitor can also see the Tomb of the Washington couple and the Slave Memorial located on the south side of the mansion. There are also shops to buy souvenirs from and a food court to take snacks at.
Posted by Edwin Antonio at 9:24 AM