The Angkor Wat is a world-famous centuries-old religious monument. This structure was declared by UNESCO as a World Heritage Site in the year 1992. It had been a finalist also to the Seven Wonders of the World. I was able to visit the site in 2007 with Dan, a Malaysian friend. On the road we breathed in cool fresh morning air as we rode the tuktuk for USD10. We then paid USD20 per person for our day pass to the monument. The temple was truly a sight to behold. 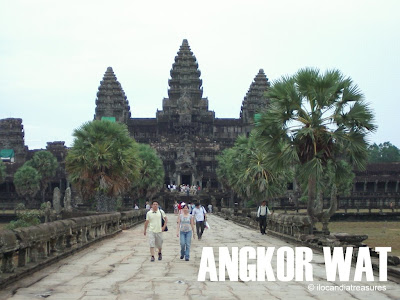 One can see the enchanting structure from afar with a lake in front of it. It was enveloped by the splendor of its beauty. It’s indeed majestic in appearance. The following are the major temples that are open to tourists: ANGKOR WAT, ANGKOR THOM, BANTEAI SREI, THE BAYON, TA PROHM, BAKONG, PREAH KO, THE BAPHUON, TA KEO, and PREAH KHAN. These were spread out in 40 miles around the village of Siem Reap. These temples were built between 8th and 13th century when Khmer civilization was at its height of its extraordinary creativity. It ranges from single towers made of bricks to vast stone temple complexes. The extensive architecture is a living manifestation of the Kmer’s strong belief to Hinduism and Buddhism religions.
The sunrise and sunset periods of the day were the best times to see the monument for the dramatic effect of lights. We climbed some of the towers. I took pictures of the stone carvings depicting the devas and goddesses. There were enigmatic and silent faces, watching with half-closed eyes carved on the walls. There were people worshipping Buddhism images. Some images were headless. There were monks roaming in their orange robe and fully shaven heads.
It was indeed overwhelming to take many photos. When we got out, we went to the shops on the side, souvenir items were on sale and the rates were much cheaper here.