To Land in Maryland

To land in Maryland is what excited me most. Its for the reason that I am going to see again my good friend Anna Mae Dumaraog who is fondly called Andy. We were together in an exchange program where we went on a cruise to Southeast Asia and Japan. She works now as a teacher in Prince George´s County. Its also because she is a very good host. 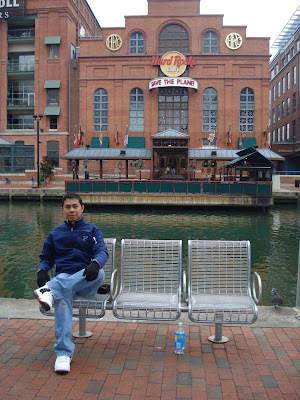 After several hours of driving from Connecticut, we finally landed to the state of Maryland. We were able to find through the GPS the place of Andy at Harry Truman Drive. We warmly greeted and hugged each other when we met. So Bernard and Cathy dropped by and endorsed me to my next host. It was so wonderful to really have many friends from all over.

Andy was able to take a leave of absence from work for two weekdays so she was able to show me around to Washington DC which was so near to her place. I saw some of the great sights and landmarks of America and also to the neighbor state of Virginia. 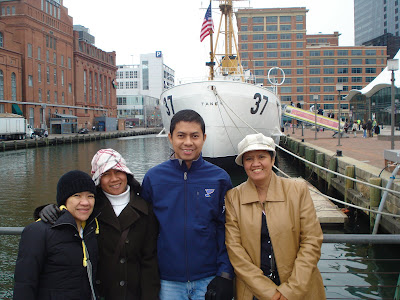 The state of Maryland is one of the 13 original states of America. It was called the Old Line State because Maryland soldiers who fought courageously during the Revolutionary War used the Maryland line as a reference as per instruction by General George Washington. Its also for the reason that it was the dividing line between the land grants given to Willian Penn and Lord Baltimore.

One Saturday, Andy and her friends Sol and Loida took me to Baltimore which was an hour drive from her place. It is the largest city in the state of Maryland. We went to Inner Harbor which is a lovely place but its cold in there. There were boats, yachts and the bridge. We went to see the National Aquarium. A variety of fish can be seen there including sharks, stingrays and many others. We watched the dolphin show which they have shown some tricks. The dolphins were adorable. I was not satisfied because it was a short presentation. However we enjoyed watching the 4-D movie at the theater. It was so funny that we had to put on eyeglasses while watching then it was like travelling over and under the sea and air and suddenly water and air also puffed to us audience. They even tickled our feet underneath the chair. We went for a dinner at a Chinese Bistro where we waited for a while since it was jampacked with customers. We dropped by to get cheesecake at the Cheesecake Factory and later ate at home.
Posted by Edwin Antonio at 6:34 AM