Statue of Liberty: Symbol of the American Dream

On the following day, we went to Jersey City side to take the ferry to Ellis Island and the Statue of Liberty. Bernard’s housemate Kuya Milo went with us. We arrived early at the ticketing booth and people started to come by. Bernard bought our tickets at USD 12 per person and that includes the monument pass. He was surprised to get it because on the internet it needs an advance reservation. We were lucky to have those tickets. There was a tight security check before boarding the ferry. We have to remove jackets, watch, belts and others. After it we went onward. 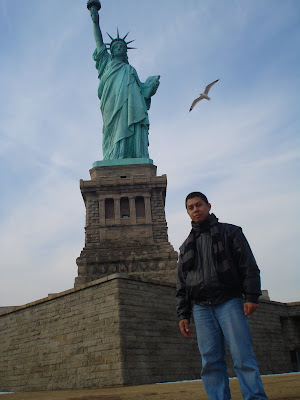 Ellis Island was our first stop and it’s located in the mouth of Hudson River in the New York Harbor. It was the main entry facility for early immigrants to the US in 1890’s to 1950’s. It was originally called the Little Oyster Island. It is a historical place having a museum where we saw the hall, the three dimensional American flag which has photos of many people. We reviewed the statistics of the immigrants in US including Filipinos. We also went to the gallery of comedian Bob Hope from Britain who became a popular and successful US immigrant. A dormitory room for detained immigrants was also exhibited. We have seen the “Wall of Honor” which was taught to be the list of all the immigrants processed there but it’s actually the names who donated to honor the immigrants. 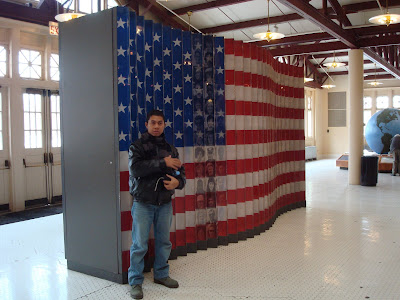 After spending two hours there, we boarded again a ferry and went to see the Monument of the Statue of Liberty. I was so amazing to see the very landmark of America. It is the recognizable icon of US that was presented to her by the people of France in 1886. It is more formally known as Liberty Enlightening the World. The statue is a robed woman holding the torch that gives out light welcoming immigrants and visitors to America. Its armature was designed by Gustav Eiffel while Frederic Bartholdi sculpted it. 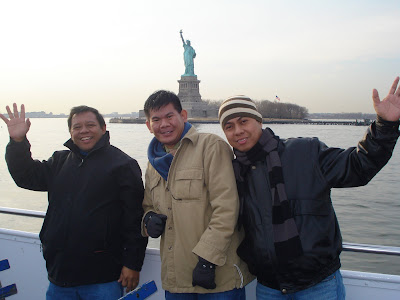 The statue has a height of 111 ft, 6 inches from the heel to the head and to include the pedestal it would be 305 ft and has a total weight of 225 tons. The face is more than 8 feet tall while the waistline is 35 feet. It has a green color because it was coated with pure copper that gives out the color due to oxidation. The monument was inscribed to the list of UNESCO World Heritage List in 1984. 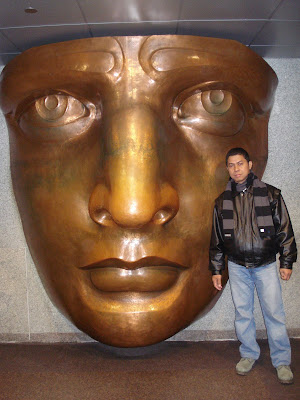 There was again a tight check before entering the monument. Aside from removing things from your self, there was an air puffer that blows into your body to check for some chemicals. We climbed 156 steps on to the museum. Elevators are available to use. Upon entering we saw the torch, the image, face and the feet. It was also exhibited the way they constructed the statue. If you go outside you can get a view of the Manhattan, Ellis Island and Jersey City. Wow I only get to see these scenes from the movies and now it’s for real. What a sight to behold.

Posted by Edwin Antonio at 6:03 PM