I was happy to meet again Bernard not in the Philippines anymore but in the US now. After our tour of New York he took me home to Aberdeen-Matawan in New Jersey. It was nicknamed as the Garden State since it has wide area of farmlands and produces fresh fruits and vegetables. It has 21 counties and 566 municipalities. New Jersey was known as the "pathway of the revolution" because there were over 100 battles fought in its soil. From the station we were picked up by his priest friend. Then I met his housemates Kuya Jo, Kuya Milo and Joy. 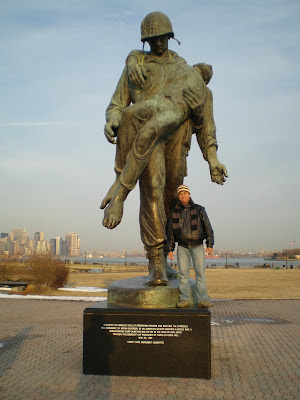 Since Bernard doesn’t know how to cook, he then asked me to cook our dinner. I didn't have any idea of what to cook but we checked the fridge for what was available. I saw vegetables and squid so I cooked seafood chopsuey. Bernard’s housemates were teasing him that he should learn how to cook and not to let his guests cook. Nevertheless, the housemates enjoyed eating the food I prepared.

On the following day we went to Jersey City and took the ferry to the Statue of Liberty. After it, we visited the Liberty State Park. It has an area of 1,212 acres. In its US Flag Plaza there were 13 flags representing the original states which were supposed to be seen but only one was displayed especially during winter season. I took photos of the Liberation Monument. There were picnic facilities, playground and boardwalk on the sides of the river where you can walk at and jog around with. From the site, one can see the Statue of Liberty overlook and the Manhattan skyline. Communipaw Terminal is a beautiful and a historic building present. We dropped by to see the Liberty Science Center. 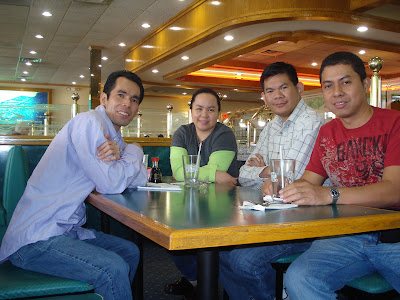 A day after the pilgrimage in Pennsylvania, Angelica Sanchez, a former high school classmate and her hubby Joefel arrived at home to visit me and we had a reunion. We didn’t see each other for a long time. We had a good time chatting and updating each other of everyone. We had lunch at a China Buffet resto nearby the place of Bernard. We enjoyed the moment. When we went back, I was surprised to be informed that the couple was taking me for a homestay. I got excited since I will have the chance to see Angelica's family and visit Connecticut. I then rushed to packed my things.

Posted by Edwin Antonio at 9:16 PM