Romeo sent me off to Winnipeg airport and bade each other goodbye. I checked in at Air Canada for my flight to Montreal and flew out at 5:05pm. We touched down at Trudeau International Airport at 8:45pm after 2 hours flight. There is one hour time difference of Winnipeg to Montreal. I waited for my host Maria Delia Dizon, a former high school classmate, since she informed me that she'll be late as she is coming from work. She even asked me what do I wear for her to immediately recognize me since we have not seen each other for so long but when she came in she blurted out with joy when she saw me. We warmly greeted and hugged each other. She introduced me to her hubby Melvin. When we went out to get into the car there was flurries or snow showers. It was another wonderful experience of snow. 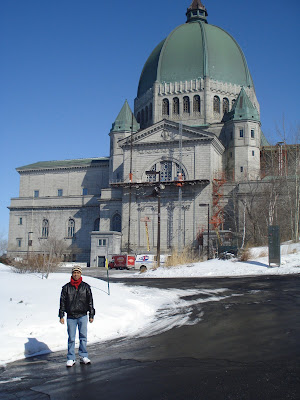 When we reached their home I was welcomed by her parents Tita Linda and Tito Eddie. They prepared dinner for me and while eating we had a chat. They asked me of the happenings in thePhilippines. They related to me their life in Canada, the good and not so good points in living in Montreal. Madel also introduced her children Mavin, Mariella and Matthew.
Montreal is the cultural capital of the province of Quebec. It is the second largest city of Canada and the home to second largest population of native French speaking people in the world after Paris. Even Madel's children speak French language. The signages were mostly in French language and the architecture of buildings were European in style. The buildings looked like that of Paris especially in the Old Montreal. 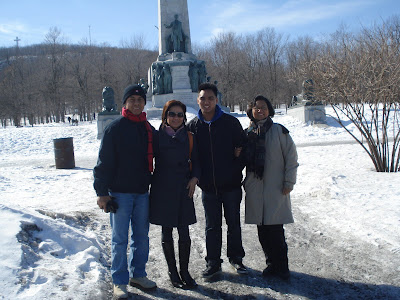 The following day we went to attend the competition of Matthew in ice hockey at Dollard Arena. It was fun watching the game as the boy was clever in playing it. They later brought me to downtown to pick up Madel's friend Elsie. I saw the skyscrappers and the shopping malls which were connected to each other underground. Some museums were also located in the area. We proceeded to the Old Town and Old Port where I got close to the fascinating buildings and the cobblestone roads. It felt like I was in Europe being charmed by old world. We went for lunch at the Chinatown for dimsum, chow mein and peking duck. Then we went to see the Montreal Highlights Festival at the park. We saw some magic shows and other stuff. It was so chilly.It was nasty cold so we went home early. We went back to the place in the evening but we were not lucky to get a parking space. There were lots of cars parked and there were lots of people atttending a show so we just went home.
On the next day we visited the fascinating Niagara Falls. We stayed overnight at Best Western Hotel. On succedding days we visited the Saint Joseph Oratory which is a popular landmark of the city located on hilltop overlooking Montreal downtown, the Beaver Lake where many people skates around, Julep where vintage cars were exhibited on summer, the Mont Royal Park, to the lookout where we saw Royal Mountain Police (RCMP) and as a finale to the ski hill of Saint Sauveur for the skiing which i fitted the equipment and tried to slide a bit with it. When i watched the skiiers, it seemed to be so easy. Melvin told me that it was really difficult to maneuver without a rigid training based on his experience. This is something interesting to try as a hobby. 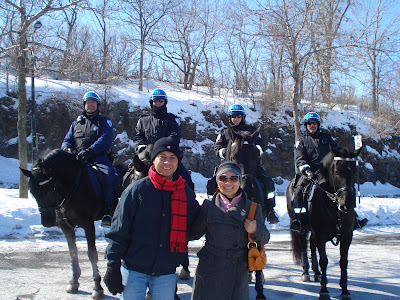 I had my farewell dinner at Madel's sister Lilia's house.They even cooked pansit for me. The couple sent me off to the Greyhound Bus Terminal for my trip to New York as I bade them goodbye and thanked them for a great winter experience in Canada.
Posted by Edwin Antonio at 1:01 PM

i'm happy, you enjoy your stay. Come back so you could experience the spring, summer and autumn season! Nice meeting you.

thank you so much tita and to your entire family for the warm accommodation.it was such
a wonderful memory for me to
keep and cherish. ill try to come
back. nice meeting you all.