A Pilgrimage to Padre Pio Shrine in Pennsylvania

I was told by Bernard when I was still in Montreal that he was joining a pilgrimage. I asked him if I can go with them and instantly responded yes. I was happy with that response because I will have the chance to see the shrine and visit the state of Pennsylvania. 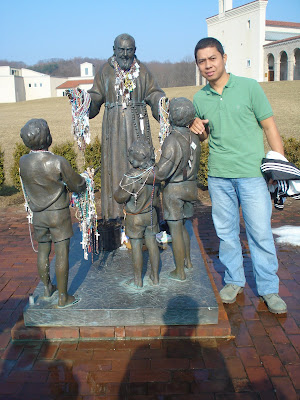 So with his colleagues and housemates, Kuya Jo, Ate Anne, Joy and Cathy, we went to join the group of Our Lady of Guadalupe Music Ministry of Monmouth County in New Jersey who organized the pilgrimage to Barto Pennsylvania. It was two hours drive. We were received warmly at the Our Lady of Grace Church and they gave a short talk about the history of the shrine and images present there. We moved to the chapel where I saw the confessionary chair and the gloves of Padre Pio. We went to the museum where we saw the replica of the granite tomb of St. Pio and the photo of his body. In the same location, the bedroom, car, statue and many others were exhibited. Adjacent to it was the souvenir shop where I purchased a rosary. 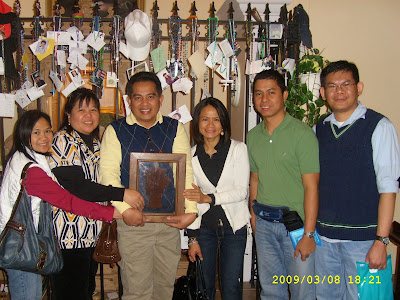 Padre Pio is known to be a man of prayer. He was born in Pietrelcina, Italy and he belongs to the Capuchin Order of the Friars Minor. He was ordained to the priesthood at the age of 23. At the age of thirty, he reached the summit of spiritual life and that he prayed continously. On September 20, 1918, the marks of stigmata, the wounds of Christ, appeared on his body while he was praying before a crucifix. He was the first stigmatized priest in the history of Church and he bore the painful wound for fifty years.

Later we went to the Most Blessed Sacrament Church in Bally Pennsylvania to attend the mass celebrated by Fr. Ignacio. It was a long mass that it took an hour and a half. There was a talk by the person in charge in the church where she introduced the antique items in the church including the old paintings which have no signature of the artist but only the face strategically located in most of them.
The relic can be seen at the St. Paul Chapel located at the back. Some of the religious personalities were buried under. There was a cemetery nearby the church. After taking lunch we went back to the shrine for the Divine Mercy rosary. As a finale we kissed the hand glove of Padre Pio and we were annointed by holy oil of Padre Pio by the priest in charge. It was an enlightening experience attending this pilgrimage.
Posted by Edwin Antonio at 7:57 PM