From Richmond I flew to Winnipeg on February 25, 2009 at 9:05am. I went to the airport early since there’s no one available to send me off. I had no smaller bills to pay my fare in the bus but I was so lucky that I met a certain Filipina Rosie who paid for my fare to the airport.
It was nice that I had a day flight because I saw the aerial view of Vancouver. It was cloudy. Later on the flight, I saw the sky clear and bright with the sun. I started to see some mountains that were covered with ice. On the territories of Manitoba, every area was frozen. As we advance close to Winnipeg it was totally white. Even the bodies of water were obviously frozen. It was so amazing to see this kind of sight. 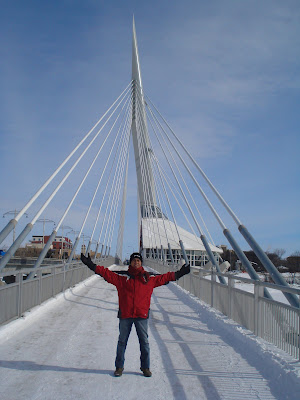 I was a bit apprehensive that many people tell me that it was totally cold that I should bring a lot of sweaters and jackets and friends even gave me some to use. The pilot even announced to the passengers that we will experience -21 degrees centigrade temperature in Winnipeg. Some passengers reacted. Our plane touched down at 1:45pm after 2 and half hours flight. The time of Manitoba is an hour advance compared to Vancouver.
I was picked up by Simone, Romeo’s neighbor, at the airport. We never knew each other but we were able to find each other. She even brought me an extra jacket. When we went out I saw that everything was covered with snow and that the coldness really got in to my nerves. It was really so cold. We rushed in to her car. We had a nice conversation about the weather and whatnot. 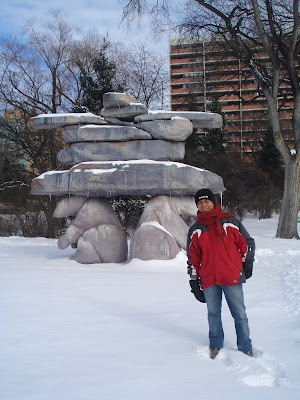 Winnipeg is the capital city of the province of Manitoba. It is a multicultural community of various ethnic origins such as English, French, Scottish, German, Ukrainian and others. And the visible minorities are the Filipinos with 5.9% of the population.
She opened the house of Romeo for me. He has still work so he came by after 5pm. He welcomed me warmly to his house and started me with some snow experience. He gifted me with a toque, let me wore long johns, socks and boots as we got out. We did some exciting snow removal and show blowing in his yard and some other neighbors’.
Later, we had a dinner of French Canadian beef stew and French bread with his neighbor Simone and hubby Normand and Romeo’s girlfriend Shauna.We had a good talk. We cited on how we got to know each other. Romeo was former Canadian delegate to a leadership program in Japan where I worked with him as one of their facilitators. Then we watched a movie Vicky Cristina Barcelona movie at his mini-theater.
The following day, Romeo took me to the Le Croissant bakeshop where we got croissant cheese and chocolate for breakfast. Then we had a walk tour to the Forks the meeting point of Red and Assiniboine Rivers. We passed by the side-spar-cable-stayed brigde Esplanade Riel. It houses the Salisbury House Restaurant. I stepped on to the longest skating rink of the world and the Guiness book of world record holder. My hand was so painful and that it cannot withstand the cold everytime I take off my gloves to manipulate my camera.
We visited also the Forks market where it is a place for foods from all over the world. We had a tour of the parliament building, then to Partage place and had jamming with his friends at Norwood Hotel. We capped the day with a dinner at KG Saigon, a Vietnamese Resto with his friend Rommel and Shauna. 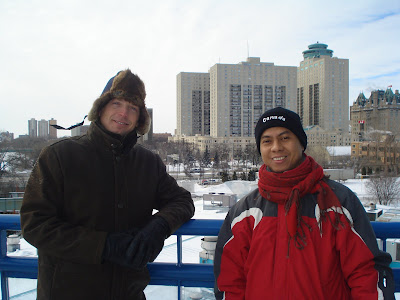 On my last day with him, he brought me to the Museum of Manitoba and Man and Nature where I learned history and the heritage of Canada. Then he treated me for a luch with his sister Anette at a Ukrainian resto called Alycia’s. As a finale we visited Fort Gibraltar where the ice scuptures were there to see.
It was such an experience of joy of life or joie de vivre in white Winnipeg. It is the coldest part of earth that I have been to. Just imagine a temperature of -45 degrees centigrade of wind chill. They even branded it as “Winterpeg.” My homestay with Romeo made me warm in the midst of freezing coldness. It was indeed a joy of life to experience an uncommon season in my own tropical country.
Posted by Edwin Antonio at 4:22 AM