Friday the 13th at Arlington Cemetery in Virginia

Andy just brought out the idea to bring me to Arlington National Cemetery in Virginia for it was one of the places visited by tourists and that she never went there. It just got into my mind that I could find the gravesite of my uncle Salvador R. Antonio there since he served in the US Navy, fought in Korean and Vietnam War and later served as security officer at the White House. So I browsed the website of the cemetery and called up. They were asking the date of interment which I didn’t know but they retrieved details based on his name. It was on Section 64 and gravesite 402. It’s incredible that I got it and was so happy about it.

We were shocked that on our way to the cemetery, the train we were riding suddenly stopped at McPherson Square Station and the lights went off. Passengers panicked and start knocking the door while security men and the people were looking at us. I was thinking of bomb threat so we got tensed. A security officer opened the emergency door and we went out. We smelled a burning odor. I was just told by the people who saw it that somebody jumped off the rails and crashed on the train we were riding. It might be a suicide. He was a black man who was around 23 years old. It was a scary moment. The train service was suspended for two hours. Luckily we were able to find alternate route of the metro. 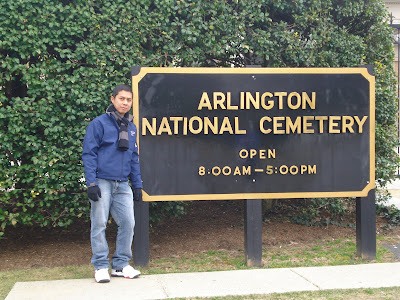 We arrived at the cemetery just a few meters from the metro station. It is a military cemetery which was established in June 15, 1864 wherein 290,000 were buried in the area of 624 acres. Some of the prominent personalities buried in the area are President John F. Kennedy and Senator Robert Kennedy. Points of interest to visit are the Tomb of the Unknowns, Memorial Amphitheater, and JFK Eternal Flame. 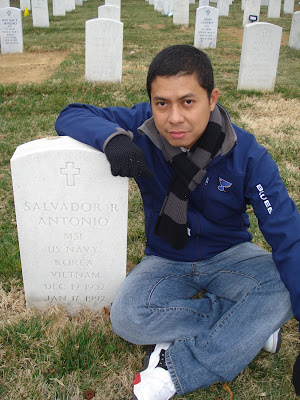 I verified the location of the gravesite and got a map. Andy and I went on foot to find it. We saw two burial rites with gun salute. We saw section 64 and started at 6,000 plus until we saw 402. It was so fulfilling to visit my uncle’s gravesite.

Tiyo Adong as I call him and his wife intended to adopt me when I was in high school since they only have one child. The papers were already done but his wife retracted and we never heard of any news anymore until his death in 1992. Neither my father nor the rest of their siblings saw his estate to pay their last respect. They instead held a prayer for him and offered mass.

I never expected at all that I could visit his gravesite here in the US. All things just really happened for a reason.

Posted by Edwin Antonio at 7:52 PM