The Fascinating Niagara Falls by Winter

With the Flores family consisted of Melvin, Madel, Mariella and Matthew, we all went to Ontario to visit the enchanting Niagara Falls. The couple alternately droved the car early at 6 am to our destination. We used Global Positioning System (GPS) to serve as guide. It is a necessary tool in driving to the countryside for directions. It took us seven hours to reach the site. We made some stops along the way. We bought breakfast at Canada's very popular coffee shop Tim Hortons and snacks at McDonalds. 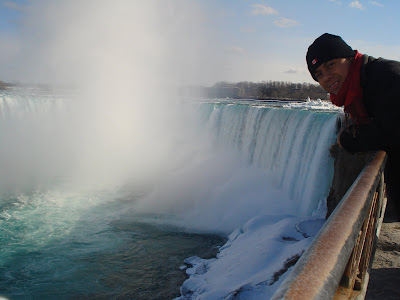 Upon reaching the area, we immediately checked in to Best Western Hotel to settle first. Then we went straight to the Niagara Falls. It was an amazing sight to experience. The surrounding waters in the Niagara River was frozen. But the flow of water still continues despite below freezing temperature. It is because of the enormous pressure of the water. What i thought of initially was that the entire falls freezes on winter season. 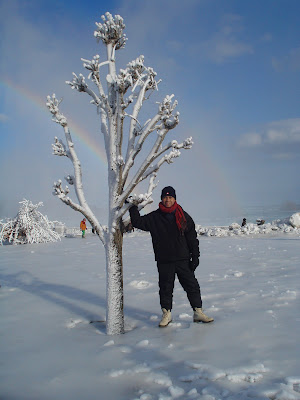 Niagara Falls is also known as the Horseshoe Falls and branded the place as the Honeymoon Capital of the World since many people were attracted to its grandeur. Many tourists flock to this site especially during summer .The Falls has two sides the American in New York and the Canadian side in Ontario. The popular side is Canada since it offers the views of the American and Horseshoe Falls. There are also several amusement centers on the said side where we saw the wax museum, computer games and many others. It was indeed a sight to behold. It was even more spectacular with a rainbow accented to it. Icycles formed on the trees and bushes around it. We also observed the gigantic mist produced by the falls. I never thought that i can visit the place. I was so grateful to Madel and family for bringing me there.

Posted by Edwin Antonio at 2:10 PM