A Bite of the Big Apple

I got excited since I am continuing my journey to the east coast of United States. My hosts in Montreal sent me off to the Greyhound bus terminal. The bus departed at 12 midnight.

An hour later I was waken up by the stopping of the bus to the US immigration checkpoint. All passengers went down with passports on their hands. After submitting my passport, several questions were asked of me such as the duration of my stay, my work in the Philippines, the date that I’m going back to work and how much money do I have. The officer asked for my airline ticket which I placed on my luggage so he even accompanied me to get it and inspect it at the bus compartment.

The immigration check was a little bit stringent. There was even a lady who was invited to a room for further questioning. After half an hour, all passengers went back to the bus. We had a lady driver for the said trip. Then we had another short stop at Albany at 4:30am. 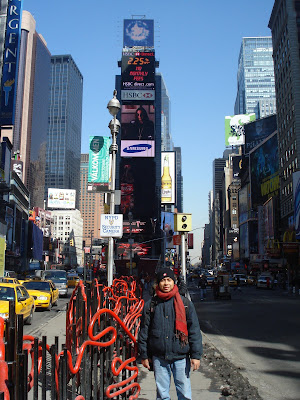 We arrived at New York City at 7:50am after seven hours and half road trip. I waited for my friend Bernard Bandong, a former elementary and high school classmate, who is now based in New Jersey. I waited for him at the waiting area near gate 66 of the Port Authority terminal but he tried to find me in gates 20's as per his information from the desk. We waited for each other for two hours. He later realized that he did not dial the roaming number that I used to txt him. We were surprised to find each other. He told me that he almost went home. 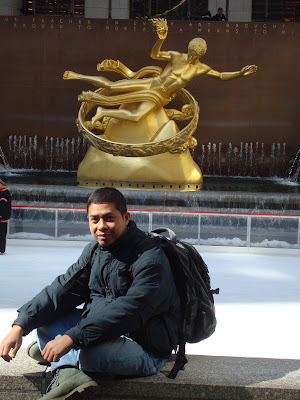 Bernard gave me a hand with my baggage. We started to do a walk tour around Manhattan. I can't believe that I have set my foot in the heart of America, the Land of the Great American Dream. I finally got a taste of the Big Apple.
The Big Apple is a moniker for New York City that was popularized in the 1920’s by John Fitz Gerald, a sports writer. He used this term in his column in reference to horse-racing. On the headline “Around the Big Apple(1924),” he cited this line:
“The Big Apple. The dream of every lad that ever threw a leg over a thoroughbred and the goal of all horsemen. There's only one Big Apple. That's New York.”
The term was a mystery before but based on the etymologists research findings, it was derived from a New York brothel whose madam was known as Eve. 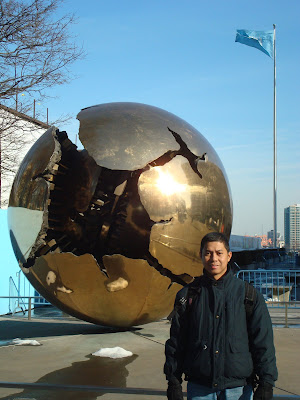 We went to the different numbered streets in Midtown Manhattan and visited the Times Square which is a junction of Broadway and Seventh Avenue, also known as the Crossroads of the World. We had seen the Madam Tussaud Wax Museum. We attended a mass at 12noon at the magnificent St. Patrick's Cathedral. We went to Rockefeller's Center, a US National Historic Landmark which is a complex of 19 commercial buildings. I saw the Prometheus statue at the center. There was a skating rink at its plaza. This is also the place where they put the giant Christmas tree during its season. We passed by the Radio Center and NBC studio. Later we dropped by at the Philippine Embassy where we talked to some of the Pinoys there. We also visited the busiest rail station in the US, the Grand Central Terminal. We visited the Empire State where New York was named for as the Empire State. 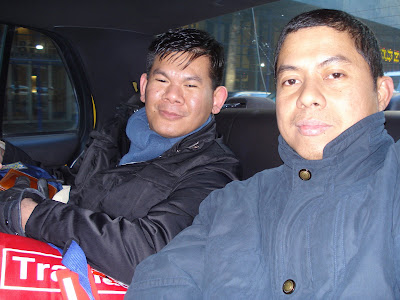 We ate burger at McDonalds then proceeded to the New York Public Library which is a huge one. We walked towards the street of the United Nations Headquarters. I saw the big globe and the replica of a distorted gun. From the UN, we took a taxi to the Madison Square and got off to the Penn Station to take our ride to Bernard's place in Aberdeen, New Jersey.