Tobogganing and Snow Experience in Burnaby

I met up with Letty James, a former college classmate, at the Broadway Station by taking a bus from Richmond. We greeted and hugged each other. She took me at the Burnaby Lake Regional Park where we had two hours brisk walk along the trails. It was a good exercise where I breathed in very cold breeze. I have seen many trees that were protected and first time to see and feel snow. I was happy to see some. They started to melt but pieces can be seen around. We had a good talk about nature. Letty related her life in Canada and she liked spending much of her time in communing with nature aside from work and family. 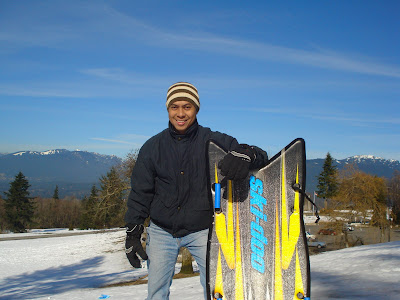 At the end point, we saw the lake and rested for a while. We saw some of the Canada geese and birds flew around. It was a nice sight to see with water and the trees at the bank. The air was refreshing. The temperature was around 6 degrees centigrade. It was sunny and bright.
Later we proceeded to the Burnaby Mountain where I saw much more snow. I got excited since it still so white with ice. I just jumped over the snow and Letty put out her toboggans where she asked me to try. 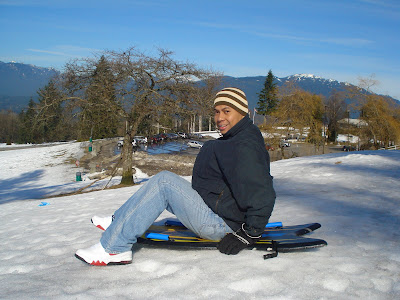 Toboggan is a simple sled. It is a traditional form of transport used by mountaineers of Northern Canada. But now it is used to carry persons to slide down a hill for recreation. It is made of fiberglass, plastic and the traditional toboggan is made up of bound, parallel wood slats all bent forward in the front to form the sideways J shape.
I was an exciting activity because she let me ride over and hold on to the edge then slid. Wow I was not able to control well where I went straight down. It was so much fun to really experience a snow activity in Canada. 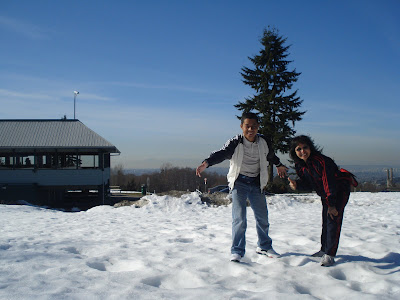 Later she brought me Simon Fraser University where we had some sushi, tea and rest. We proceeded to her house in Coquitlam where I met her hubby Brian and children.
Posted by Edwin Antonio at 9:29 PM