A Sojourn in San Diego

I was picked up by Manong Edgar from the greyhound bus terminal in San Diego when I arrived at 1:30AM. We greeted each other. It was a little cold with a temperature of 54F. When we reached their home in Meadowbrook Drive, they let me eat at once. They cooked chicken tinola with brocoli. Manang Remy woke up to see me. It was nice to see the couple in their home in San Diego. I stayed with them for 5 days. 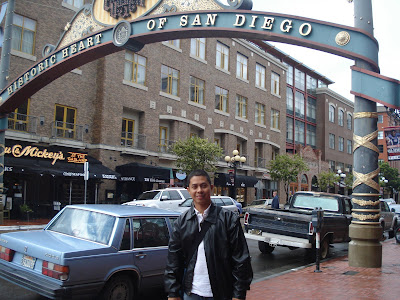 I had a walk around the Big Bay on the afternoon of Friday the 13th. I have seen the Midway and other historic ships at the Maritime Museum. I walked up to the US Coast Guard then back again. I dropped by at Fish Market Restaurant. Took photos at the 25 foot statue of a sailor kissing a nurse. Then proceeded to the Seaport Village.
On Valentine’s Day, I was treated by the couple with their son Edsel to visit the Seaworld. We have watched spectacular shows of the dolphins, killer whales and other sea creatures. We spent almost a day in the park. Later in the evening we were invited to Tata Flor’s residence to have a dinner.
The following day Manong Edgar and Edsel took me to the Outlet, a commercial center with lots of stores. It is located in San Ysidro just near the border of Mexico where I saw its flag waving. Then in the afternoon, with Manang Remy, we all went to Balboa Park and San Diego Zoo. Most of the museums were already closing because we were late. 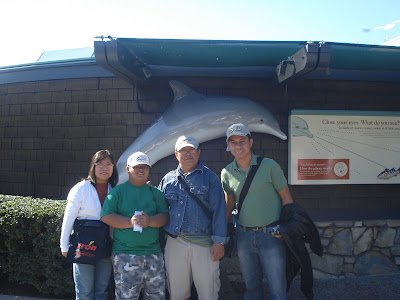 A trip to Tijuana was my itinerary on the following day. It was another experience to treasure since i got a first hand try of the culture. Then I visited the Gaslamp Quarters back in San Diego. Later I took the trolley to the Old Town and hung out to Casa Guadalahara for a margarita, enchilada and nachos.
On my last day was just rest at the house and preparation for my trip to Las Vegas. Manang Remy and Edsel sent me off to the greyhound bus terminal. Manong Edgar was at work. We bade each other goodbye.
Posted by Edwin Antonio at 7:13 PM