Ay-ayam refers to the traditional games played in Ilocos. There are various types and forms of it. However there were only few games which were featured in the celebration of the Pamulinawen Festival of Laoag City. 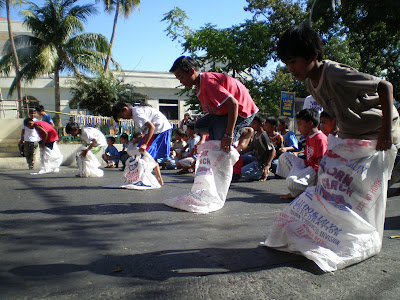 These were the games palo-sebo, sack race, kadang-kadang, tug-of-war, juego de anillo and 40m spring hurdle. There were two categories namely elementary and secondary division participated in by the students of the schools in Laoag City.

I was just disappointed to observe that there was only one group who fielded an entry for the kadang-kadang. Some groups attempted to challenge and play it but cannot balance well. I have tried this and did balance well. I remember that when we went to visit an elementary school in Japan they were equipped with this game tool, tried it and the pupils were amazed to see me balance and walk with it.

The reason that kids nowadays don’t play much these traditional games is that they do all the time the virtual games just sit on the couch and play alone. With all the proliferation of techno games such as play stations, wii, computer games and cell phones. So no more interaction and group dynamics and definitely no more physical work out.

It would be better to promote these games to young children and at least conduct an olympics of traditional games or more periodically not only to preserve it but to let young people appreciate the value of playing real games.

Posted by Edwin Antonio at 9:45 AM

Found your blog via a link at Herdy Yumul's Riknakem. I love reading your blogs. I totally agree with you that children nowadays don't do outdoor games anymore. My son has his own Wii and Nintendo DS but when the weather permits, I let him play outside. He goes to soccer training and I let him play with the neighbor's children outside. Even if it is winter, as long as it is dry, he is outside. I can see that he looks healthier when he plays outside. So, children should really be encouraged to spend more time outside playing.

Thank you Donna for your comment.Its good that you engage your child in outdoor activities.
Its very important that children do some physical work out. A physically fit person will have a sound mind.