The coronation of Little Mr & Ms Laoag City was held on February 3, 2009 at the City Amphitheater. This program was held under the auspices of the City Social Welfare and Development Office. 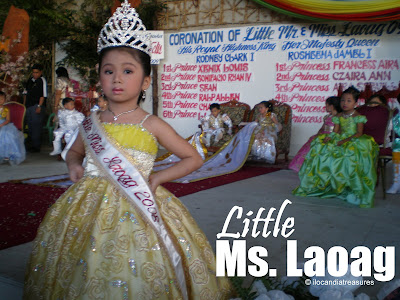 I was able to catch up with the farewell walk of Little Ms Laoag City 2008 Noreen Ann Corpuz, daughter of Dr. & Mrs Nonilone Corpuz. She was crowned based on a pageant of 21 little girls. She was in kindergarten then. She turned over her crown to the new Ms Little Laoag 2009 Rosheena Jamel with her escort Rodney Clark. I was surprised to see a lot of little girls clad in their long gowns as well as their escorts, the little boys donned in barong. It was like Santacruzan. It was a very long presentation of the knights, muses and the royal court. The royal court was composed of the queen, six princesses and their escorts.
Posted by Edwin Antonio at 2:27 PM