Most of our kababayans usually return home during Christmas seasons and fiestas. This time the United Laoaguenos of Hawaii (ULOH) members came back home just to join in the celebration of the Pamulinawen Festival. They filed their leave of absence from work and spent money for their airfare just to see Laoag again and be with their relatives. 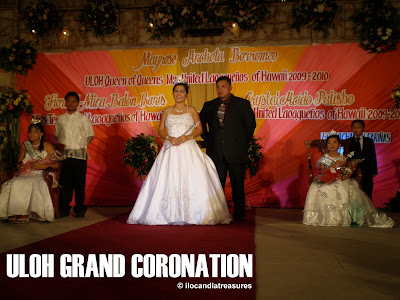 The city government of Laoag had scheduled and prepared for them a night to remember. A grand ball and coronation night was held on February 09, 2009 at the City Amphitheater. A wonderful grand march by the ULOH officers and members and the people of the city government was performed at the opening of the program. Speeches of Mayor Michael Farinas and Dwayne Bueno, president of ULOH were delivered. The Tawid Cultural Troupe had also performed upon the invitation of liaiason officer Stan Ramos. Rigodon was performed by the INCAT dancers. 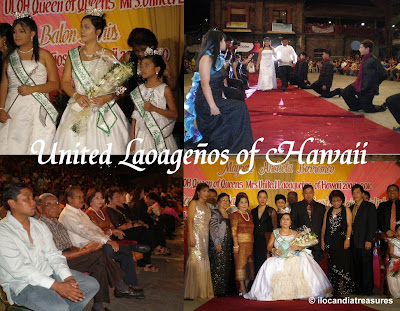 The very highlight of the ball was the grand coronation of the Queen of Queens Mrs ULOH Maryrose Borromeo, Teen Miss ULOH Florelei Baris and Junior Miss ULOH Crystal Palisba.