Arrival to the City of Angels

I went for a trip to North America and took the flight PR 102 of the Philippine Airlines at 10pm on February 12, 2009. It was a Boeing 747 aircraft. It was fully booked. Most of the passengers were Pinoy seniors who are now US citizens who had their vacation in their respective provinces. A Tolentino couple were my seatmates at 32 ABC. We had a talk about the life in America. 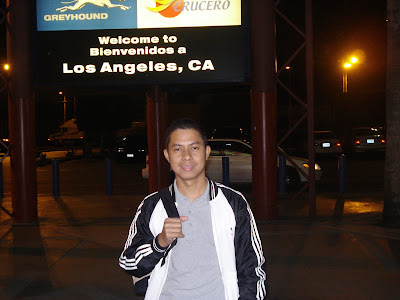 We touched down at LAX airport at 6:30pm and it was still February 12. It was a quick pass through the immigration since they don’t have much questions. It took long for me to wait for my luggages at the conveyor since numerous and extremely huge baggages were moving around the carousel. It took me a little more than an hour to wait for my bags.

I inquired from the information counter on how to get to the greyhound bus terminal since I am taking it bound for San Diego. I took the supershuttle which costs USD16 for a passenger. But it was a little expensive since the flyaway bus can get you to union station. I picked up my ticket at the counter of the bus terminal for USD17. It was 2 1/ 2 hours ride.

Posted by Edwin Antonio at 3:26 PM