By virtue of Republic Act No. 8988 enacted on January 22, 2001, the capital Vigan of the province of Ilocos Sur became a city. It is now on its 8th year to cityhood. However, this is already an old city because it is now 250 years in existence since the royal decree issued by King Ferdinand VI. Its former name was Ciudad Fernandina. To trace back, Abra had been a former territory of Vigan until she gained independence. Thus, the government officials of the municipality of Bangued were invited to this occasion to witness the commemoration of its foundation anniversary as a city. 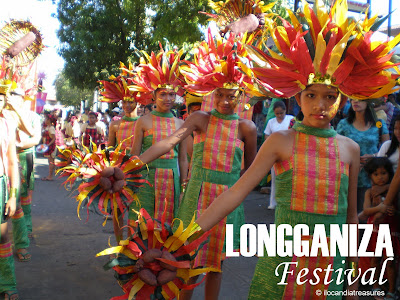 The city is famous for its variety of food products such as empanada, bibingka, bagnet, sinanglaw and many others. However, the Biguenos had paid tribute to the much well known product called longaniza or pork sausage. This sausage has a distinct taste of an Ilocano. The ground pork had been added with seasonings particularly of garlic and Iloko sugar cane vinegar that gives the native taste and the mixture is put inside the intestinal epithelium or sheath and being fried on a pan. It has been patronized by visitors and guests of the city. The celebration has the purpose to promote much further this food product. 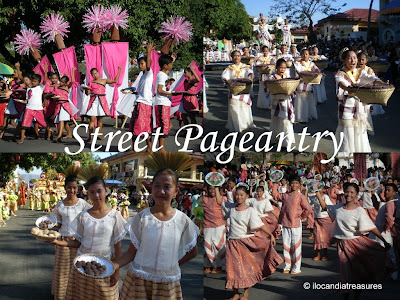 In line with this, a street pageantry highlighted the fiesta celebration showcasing the Vigan Longaniza. There were 18 groups who competed in three different categories namely: elementary, secondary and open divisions. The dancers wore colorful costumes made up of the indigenous textile called abel. They accentuated their costumes with the beautiful headresses made of feathers and other indigenous materials. They held in their hands plates with longganizas. They danced to a uniform music which was a lively one. They have depicted on their dance moves on how to make or cook the sausage and even how to serve it with the presence of cooks and waiters in the dance parade. 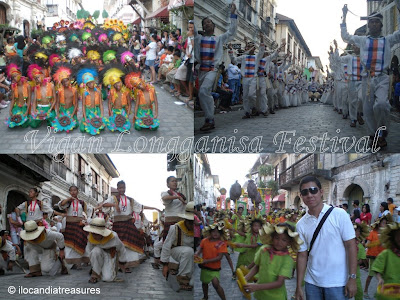 The various groups started their dance from the city hall after the opening program following the speeches of Mayor Eva Medina and other important personalities. They ended up to the beautiful site of the Heritage Street. It’s truly a wonderful pageantry which I enjoyed so much. A feast for the eyes and not for the stomach since generally Ilocanos do not prepare foods at home as what people in the Southern Philippines are used to. People simply partake foods after the event eating barbeque, grilled longganiza, okoy, empanadas at the plaza just like what I did.

Posted by Edwin Antonio at 7:13 AM

Cool video... Nice to see the celebration of life in the Philippines. I was just there back in April for my very first trip to the Philippines. I didn't get to visit Vigan but I stayed most of my time in Pangasinan. I loved it so much, I even made a book about it. Great to see your video. I happened across it because I was looking up longanisa...lol.. I miss eating that every morning. It's not the same in the US.

Thanks Anthony for your comment. Of course Ilocos region is one of the best. Pangasinan is my home province. You should also visit Vigan and Laoag on your next trip.