I was advised by a friend from Ilocos Sur that Kannawidan Festival was ongoing especially a performance of tribal dances and rituals will be held in the evening of January 30. But it was a wrong tip for me regarding the schedule because on my arrival after a big rush from Laoag City, the said event was already finished. It was held in the afternoon. As I checked in the program of activities, it was also reflected to be at 7pm. 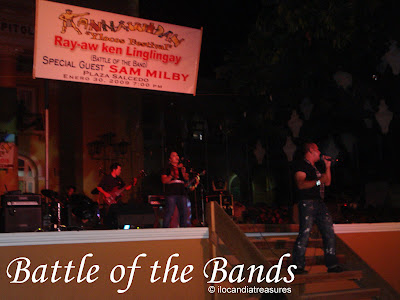 Anyway, there were several tribal groups who presented their practices and their music and dance to depict the lifestyle of uplanders. They wore their traditional costumes and danced with their traditional music. The event was held infront of the capitol.
This is the second time that this festival was held in commemoration of the foundation anniversary of the province. It was named before as Ylocos covering the whole of Ilocos Norte and even Abra. Kannawidan refers to traditions. This big affair was opened on January 28 and lasts until February 4, 2009. They have lined up various activities for this occasion such as the battle of the bands, concerts, calesa, caritela and vintage vehicles parade, pageants, horse race, fashion show, games and many others.
I was not keen to watch the battle of the bands but the people from the Office of Governor Savellano were kind to entertain me and they gave me a seat infront of the stage so I watched it anyway. I enjoyed watching since most of the bands were good performers. I liked the performance of the band called Frozen Fire. The other bands which I saw were Sundae Cone Band, Rhythm Section Band, Samiweng Iloko Band, Half Six Band, Sweet Taste of Defeat Band, and Half Age Band. All the 18 groups interpreted one alternative and one reggae song. The last piece was their original Ilocano composition depicting the theme. Their renditions of their original Ilocano songs were just amazing.

Posted by Edwin Antonio at 2:32 AM