PBA09qq6s247
What a wonderful way to start the new year with an extreme adventure. I have just joined a very successful trek to Lake Linao on January 8 and 9. It was organized by Bishop Sergio Utleg and Fr Papus Dimagiba of the Diocese of Laoag with the purpose of exploring and appreciating the beauty of Ilocos Norte and developing friendship and team-building among climbers and nature lovers. I was informed late of the event and joined in at the last minute. It was indeed a challenging, exhausting but exciting and adrenaline-pumping outdoor activity wherein we went to trek for eight hours more or less. 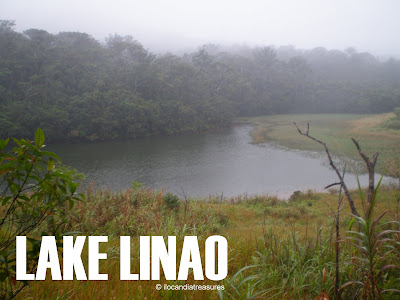 Our group was composed of participants from the Diocese of Laoag, Sokisok Bikers from Bacarra and was joined by so called Alabang Boys from Manila. We had a total of 26 trekkers and there were only four women in the group. We assembled at the Bishop’s Residence in Laoag at 4AM then departed to Panziann, Pagudpud at half past four. We arrived at Panziann Chapel past 6:30AM. Left the vehicles and boarded an elf truck with all our things. It was a bumpy road going to the town proper of Adams. We crossed around ten rivers with makeshift wooden log bridges without side panels. We passed by two hanging bridges. We arrived in Adams after an hour and disembarked at the gymnasium where we met the coordinator and the people to guide us and the porters to carry some bags of our co-trekkers. We had two military escorts.
After a prayer led by Bishop Utleg we commenced the trek at 8:30AM. It was two hour trek to the base camp in Masasabog. We walked on the farmlands and sides of the hills. We passed by some ravines. Sceneries were wonderful to view. The nature is very green. We again crossed rivers and hanging bridges on foot. There were four hanging bridges namely Salowinab, Cawcawat, Anuplig, and Anat. We saw and passed by Anuplig and the Cadisan Falls adjacent to the Masasabog base where the Bolo River originates. 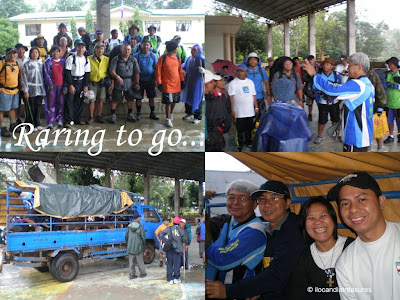 After taking our packed lunch at Masasabog and a short rest, we moved on to the most challenging stage that was climbing the Cadisan Mountain. This was simply grueling climb as it was very steep. Most of us have to take a break often as we were gasping and it seemed like a never ending climb since we don’t have idea where will it end. From a certain portion of the Cadisan Mountain one can have a glimpse of the beautiful view of the upper layers of the Cadisan Falls where I was told it was not accessible.
We trekked in the midst of the virgin rainforest where we saw varied species of flora and fauna. There were many species of plants. We have seen plants as pointed by the guides such as the wild strawberries, mushrooms, pitcher plant, cherry like fruit called bugnay, edible wild ferns, giant ferns, palms with torns, rattan that side hooked our shirts and bags, big kamagong trees and old balete trees where its roots and trunks in entangled shapes and forms. Some trunks carpeted with moss, algae and the bird’s nest plants. There was also an edible sour fruit called dagemkim which I tried. I was also shown by a guide certain specie of a poisonous plant.
We heard some chirping of birds. The sounds of koroko a pigeon like bird with red feet and varied colors of feathers. Kalaw bird sound was loud as they flew around the trees. We saw big centipedes, butterflies, big ants crawling on the bark of trees and of course the tiny leeches called alimatek in the Ilocano dialect. They just hop on to your skin as I experienced them on my face, legs and tummy. It was good that they were not that freaking dangerous. They just suck the blood then when they are full they just fell out. Many other insects can be seen in the forest. 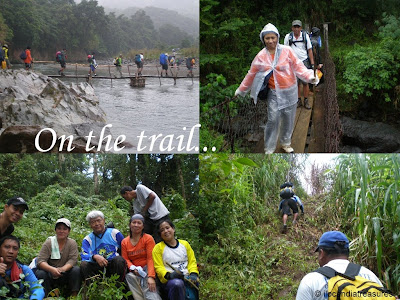 The next level was that we have to step on the large rocks and boulders as we traversed the long stretch of a river. The water was so cool and clear. Due to exhaustion we gulped water from the river and washed our faces. That was so refreshing. There were instances that some of our members slid on the stones because it was slimy and slippery. Extra precaution was then taken. The surroundings started to dim as it was cloudy, covered with trees and that it was already nearing 5 o’clock.
After the river, we finally reached Lake Linao at 5:30PM. It was so rewarding to see our target after nine hours of trekking. It was a marvelous site indeed. I never thought that we can get to it. Lake Linao is 800 meters above sea level. To date, we were the fourth batch of trekkers who explored the place.
Three of us participants with two guides have taken the different path and arrived at the other side of the lake. We have not seen footprints. We have stepped on wimpy mud as likened to quicksand on the bank of the lake. My other co-trekkers went back and followed the original trail. I opted to cross the lake in order to get to our camp site much faster. My guide Brent tested the level of the water and so it was just up to the waist. I secured my things on my bag with plastic so as not get wet and took my shirt off and braved the water. I enjoyed the water and took a dip instead. I was refreshed after that long day of walking. I was cleansed of the mud and dirt and even acclimatized. I can say that I was the only one in our group who took a dip in the waters of the Lake Linao. 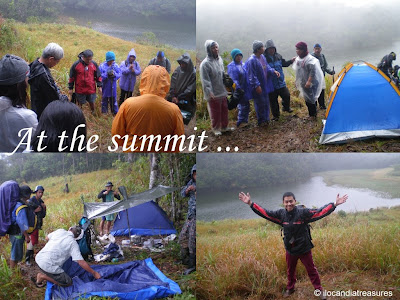 Since most of our veteran co-trekkers arrived earlier, they set up the tents and got ready for an overnight camp. I dried up myself and changed my clothes. I had a dinner of pork spare ribs sinigang and poached salmon. I had eaten so much and had a very good appetite, of course to compensate for the lost energy in the trek. I shared a tent with Eddie. After settling down, I watched Joel and Roselyn cook the pinakbet for our group’s breakfast. After which, we called it a night.
The big challenge we encountered for most of us was that we got wet during our sleep since it rained for the entire night. I got soaked since the water really penetrated on our tent. Both of us in the tent nevertheless survived the rainy night and lucky to get a few hours of sleep.
It was still drizzling on the following day and everybody started to prepare themselves and took breakfast. Our group had a breakfast of pinakbet and packed our lunch of adobo chicken which was cooked again by Joel. We disassembled our tents and packed our things and moved on. We took the same trail. The only difference was that the soil became very soft and muddy. Our trail became slippery. Extra precaution was taken by each participant. Some of the shoes have to be tied and later gave up and changed. Some of us got slid on the trail. It was advantageous to have a cool climate because of the rain. There was not much dehydration and sun burn worries.
It was ironic to experience Cadisan Mountain that in the assault we had so much difficulty but upon descent we got to slide our body since it was muddy and slippery. I enjoyed much the sliding since not much effort exerted and I saw the picturesque view of the Masasabog with its mountain ranges and hear the rivers flowing on its side. 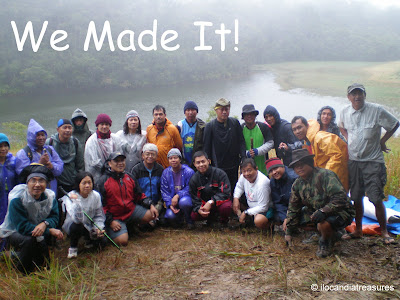 I slogged through the mud after several hours and luckily reached the Bolo River and took an instant dip on its cool crystal water. It helped in removing mud on my self. I took my lunch at Masasabog base. Rested for more than two hours and waited for the others. We then took the last leg of the trail. We thought it was already easy and just wore my slippers but we were mistaken that it was even so muddy that we have to change back to our shoes. Along the way the dusk set in. We put out to use our flashlights for a night trekking. We reached the town proper at 7PM and the whole group was settled at the gymnasium and immediately boarded the truck back to Panziann. We reached Laoag at 10:30PM.
Upon arrival at home, I felt the pain of muscle sores at my legs but took a hot shower. It was very fulfilling to conquer rarely explored mountains and Im happy to say that I am now a full-fledged mountaineer.

Helpful Tips I Learned from Mountaineering
1.Physical and mental preparation is a requirement before embarking on a mountaineering adventure.
2. Be sure to have wooden stick. An improvised one can be made. This can help you propel you up a level and prevent slide in descending.
3. Gloves for both hands are necessary to avoid cuts and wounds especially when you grasp for plants with torns or sharp stones.
4. When its slippery with mud, its better to slide down with the butt or feet when descending
5. Travel light. Only necessary materials must be brought since it will add up a weight to your body.
6. On dealing with leeches, do not force to take it out since it will not close. Just let it suck the blood and wait for it to fall down. Or you can spray alcohol over it.
7. Bring a lot of trekking foods to replenish energy such as chocolates and candies.
8. Put all things in the bag and let your one hand handle the stick and the other hand free to hold on to whatever it can grasp in times of slide.
9. Begin and end with a prayer for guidance.

Congratulations, sir!!! ^_^
Fantastic blog, as usual. And what an inspiring effort from you and your fellow trekkers. I hope to join you next time.

Thank you Alaric. Looking forward for your participation on the next trek.