Adams: A Garden of Eden

Exactly 11 years ago when I visited the town of Adams in Ilocos Norte and this time was my second. It still awed me with its marvelous beauty. I remember that we crossed around ten rivers before we reached the town proper. We walked through the hanging bridges. From that vantage point I saw some adults and children swimming. I joined them swim. The children were quite shy but they showed off their skillful style of swimming. Despite the strong current of the river water they can still cross the river straight. However for my case I was almost taken by the flow of water. 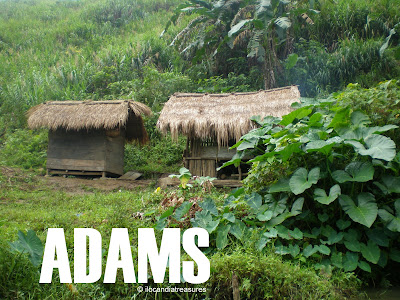 I saw the picturesque sceneries. The green mountain ranges were so perfect accentuated by the rushing water of the river and the waterfalls. One can safely drink clear and cool water straight from the river or at the falls. This is the place where I first tried eating the delicious adobo meat of wild pig. It’s endemic to the forests of the town.
The lifestyle of people is so simple. Traditionally, they just live in a wooden and nipa hut. They use wood to set fire on their stoves. They make use of the clay pots to cook their foods. The vegetables they cook were so fresh picked from their backyards or fields.
Adams is a 5th class municipality and it is composed of only one barangay covering an area of 138.25 km2. It was founded on May 16, 1983. History says that there was no factual record of the town before 1918. But a legend was often retold that during the term of American Governor William Taft who was fascinated by Baguio’s climate, some of his American constituents would love to stay north of warm Manila and some landed in Pasaleng Bay. 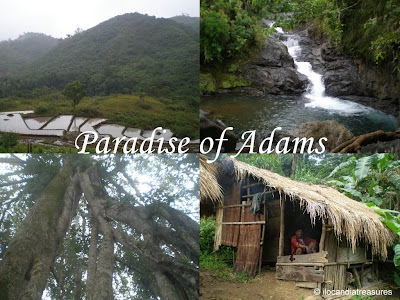 The tribes folk thought that they were being raided by pirates and rushed to the deep forests climbing the mountain cliff and steep ravines. They reached a valley with crystal clear water cascading downstream which is referred to now as the Bolo River. It was abundant of eels and fishes. They harvest many fruits and vegetables and catch deers and wild boars. With the bountiful blessings, they branded it as Karayan ni Adan but its name was later corrupted to Adams.

Adams is another wonder of nature. It’s a site to behold. Truly one can say it’s a Garden of Eden.

Posted by Edwin Antonio at 7:50 AM

Am delighted to bump into your rich blog. How come I found you just now? Makes me wonder how many more in the Ilocano bloghood I have not visited.

Am linking you ha.

By the way, I and my colleagues are going to Adams this Sat, and we are so thrilled at the prospect.

I am sure you have enjoyed your visit to Adams. I love that place.

Thanks for visiting my blog and for the comment.

Hope to meet you in person one of these days.

Visit Adams I have not. It's a long story, but let me just say that circumstances were not my side.

Anyway, a research team from MMSU are doing an inventory of Adams' flora and fauna, and they are inviting me to join them on Feb 9-13. This work is very important because the natives will then be guided on what to protect in their land, which is now an eyecandy to mad developers, miners, and greedy human beings. I have reservations though because I have already promised to entertain guests during the fiesta.

But to paradise i will go in due time.

You are doing a really excellent job. Ilocos is fortunate to have you.

And yes, I chanced at you during IN's 191st Anniv celebrations last week, and the way you smiled while taking pictures showed how much you love what you do.

Thank you Herdy for appreciating my blog. There's so much to write about Ilocos. Little by little we cover them.

I think that research project would do a big role in preserving the environment and at the same time educate the locals on how to give importance to their flora and fauna.

Hope in the next time you see me you would tap me and maybe we engage in a talk.