A Taste of America in Asia

My journey last weekend started in Laoag City as I booked a connecting flight from Laoag to Manila to Guam. I flew via Philippine Airlines to Guam at 10:10PM at Centennial Terminal. It was a little more than three hours flight and the local time in Guam is two hours advance with that of the Philippines. 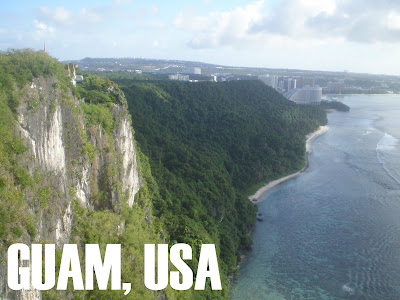 Guam is an island in the western Pacific Ocean and a territory of the United States of America with a civilian government. It is where America’s day begins. This island has a long history of European colonialism and then taken over by US from Spain during the Spanish American War in 1898. It has a population of about 173,000 with a total land area of 209 sq mi. 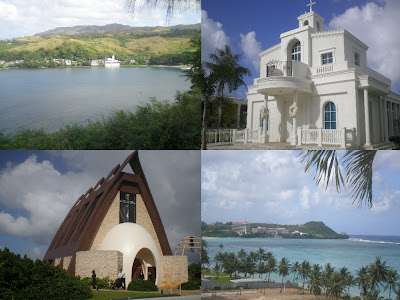 Day 1
I arrived at A.B. Won Pat International Airport at past 4AM. I met on the flight my facebook friend Michelle. After passing by the immigration, I waited for a short while then my former student Nino Matias and his wife Michelle arrived to pick me up. We greeted each other then boarded his brand new car and took me to my hotel. I was surprised to hear a local Filipino FM radio station on his car. We checked in early at Holiday Resort and we started the day with a breakfast at Dennys in Micronesia Mall where I had a plate of Chamorro Slam, a combination of fried rice, egg and sliced sausage. Later Gil Joya, Nino’s friend came to join us. He drove for us and toured us around the island.
Our first stop was the Chinese Park where you can see the statue of Confuscius and the buffalo statues painted in gold. Then we proceeded to the Plaza de Espana where we have seen the old cannons and the chocolate house. Adjacent to it is the cathedral where it has a modern design made of glass with paintings. I observed that all of the churches were airconditioned. We went to Latte Park where I have seen the carved stones. It’s the very symbol of the Chamorro culture. We had a glimpse of the Governor’s house on top of the hill. We went to Asan Beach and Agana. It was basically a nature tripping. 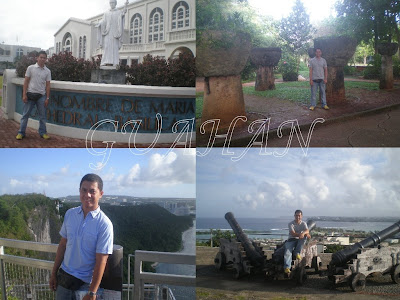 We had lunch at the house of Gil where his mom prepared so much from pancit palabok, fried tilapia, shrimps in garlic and butter, roasted beef, cucumber salad, lumpia, buko salad to chicken kalagwin, a spicy recipe made of minced chicken wrapped with tortilla. She even gave me something to bring home.
We went back to the hotel where I took a power nap. Ilocano Steve Cabading from Badoc, Nino’s friend came over to see us at the hotel and then later brought us to the Japanese Autumn Festival celebration at the Ypao Beach Park. He had some tickets at hand so we used that to get Japanese foods such as chicken karagee, california roll, yakisoba, rice and drinks. We watched the cultural performances by the Japanese people and even joined their dance and their ritual carrying their shrine. This celebration is nostalgic for me since I remember the good days in my participation to Japanese exchange programs. Its another dose or exposure to Japanese culture.
Steve took me to the Christmas Festival but it was dry where there were no more people around. He instead treated me for dinner at Tony Romas Restaurant. We went later to K Mart where I went to see some stuff. This is where Michelle works. I met Mason, the Chamorro friend of Nino. Went back to the hotel and we waited for Gil to come after his duty from the hospital.
Went to Club Vikings where we experienced watching a strip show. The girls were so flexible and very acrobatic since they can rotate around a pole and can split. We had a bottle of Heinekin beer. After the boy’s fun, Gil treated us for a very early breakfast at Fujiichiban Resto where we had noodles, fried rice and dumplings. It was really a long day. 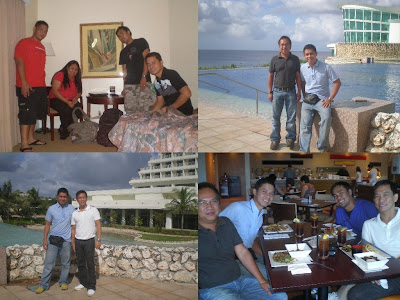 Day 2
On the following day, Steve picked me up at the hotel and went for a breakfast again at the Kings Resto. Later, we attended the mass at the Cathedral. Proceeded to the Asan Bay Overlook and then to the Leo Palace Resort. He again treated me for a buffet lunch. We had a quick tour of the resort. Its chapel was so simply elegant overlooking the sea. It’s a nice wedding venue.

We went to K Mart and Guam Premier Outlets for some shopping. I was able to purchase some chocolates, a slipper and two pair of pants at Ross.
Nino treated me out for dinner at Jamaican Grill where I had partaken a chicken and rib combo with Jamaican rice and soda with vegetable salad. They served me with sundae cake for a false birthday treat again. Had a nocturnal walk along Tumon where we saw city’s lights. We saw the Outrigger hotel where you are free to enter and just sit down at the lobby for internet. ABCs store was sprawling along the Tumon road. I have seen five in a row. I have seen the Hard Rock Café. Nino and I went for a night swimming at Tumon Bay. The water was perfectly fine to soothe a tired body.
Day 3
I had morning swimming at the same beach. It was so calm and cold. Then went to the hotel’s pool where I swam alone. Gil picked me up at my hotel and went to Sheraton Laguna Guam Resort Hotel where Steve treated us for buffet lunch. There was a Mongolian barbeque, lamb chops, poki (raw fish) and many others. We had a quick tour of the resort.
Gil took me to a Hilton Resort Hotel where I have seen the tree bar, the miniature hilton holiday express trains and the lovely chapels for exclusive and intimate weddings. We passed by Hotel Niko Guam then proceeded to Two Lovers Point where it offers a breathtaking sight of the ocean and the island. Its an amazing legendary scenery. Gil took me for an ice cream then bade each other farewell. He has to get back to work while I was turned over to Nino & Michelle. Went to Ross department store where signature brands can be bought at lower prices. We had dinner of pasta at Capricciosa where I was again offered birthday song in Italian way while they gave me free ice cream dessert.
Went to their house for sleepover before I left for the airport at 4:30AM. All my things were packed and flew by 6AM and reached Manila at its time past 7AM, Then connected my flight back to Laoag then started working again.

Posted by Edwin Antonio at 7:00 AM