After the dance parade at the Asin Festival in Pasuquin, a stage play called Komedya Ilokana was held at the amphitheater. This is usually being held during fiestas. I was surprised to see some characters in colorful royal costumes. These people were municipal employees who participated in the revival of this local stage play to which they said had been stopped for 20 years. 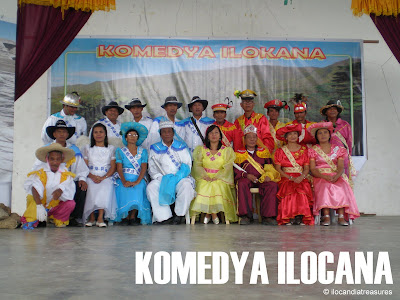 The story revolves on the existence of kingdoms of and . A prince from a kingdom wants to marry the princess of the other kingdom. There were discussions from among the royal members about the issue. It was also a depiction of the conflict between Christian and Moros.

The characters usually declaim their lines or dialogues in Ilocano dialect. I just observed that the show was dragging since they don’t act spontaneously. I thought some characters would think of their dialogues during a gap but when I got closer to the stage I just heard some dictations happening at the backstage. I think it would be more interesting if they can memorize the lines for spontaneous delivery, place a better sound system and polish the acting abilities of the casts. The dances were just exciting to watch.

Posted by Edwin Antonio at 6:51 AM