Two Lovers Point is the highest cliff in the Tumon Bay. It is also called Puntan Dos Amantes. This is a site of a Chamorro legend where a young beautiful lady who was supposed to get married with a wealthy Spanish captain, as arranged by her father fell distraught and ran away. She met and fell in love with a Chamorro warrior. When his father learned this, he got angry and set the wedding on the next day. 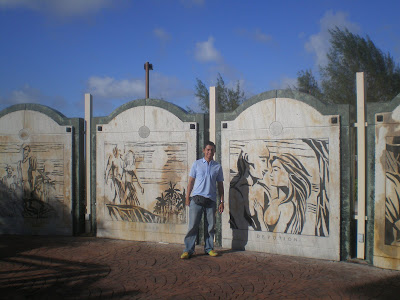 But the girl stole away to the same high point along the shore and once met her Chamorro lover. They were pursued by her father, the captain and the soldiers and they were trapped between the highest cliff and the approaching soldiers where the man warned them not to get close. The two lovers tied their long black hair into a single knot and kissed for the final time. They leaped over the long, deep cliff into the roaring waters below.

What a tragic romance story. It is a version of a Romeo and Juliet. But it only signifies a genuine love for each other. 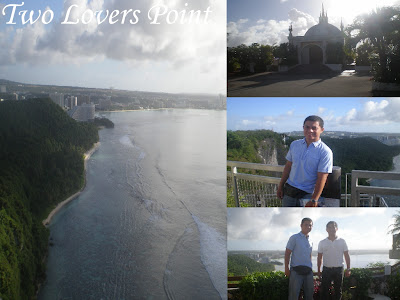 By the way, this is being featured on the background of the seal of Guam where it juts majestically into the endless waters of the sea. It portrays the people's faithful commitment to passing their heritage, culture, and language to the endless sea of future generations.

This is a perfect site for a wedding since it has chapel for the ceremony and a great site for pictorials. Much so that this was a site of lover’s romance story that became a symbol of true love. It’s a love of two souls entwined in life and death.

Posted by Edwin Antonio at 6:11 PM