Latte stone is a trademark of the Chamorro culture. Latte is used as support for housings and buildings of the Chamorro people. It is composed of two stones. The shaft stone placed on the ground is the pillar (haligi) and the head is cap stone (tasa). The head stone is a hemispherical stone capital. These latte stones are found throughout most of the Marianas Island. 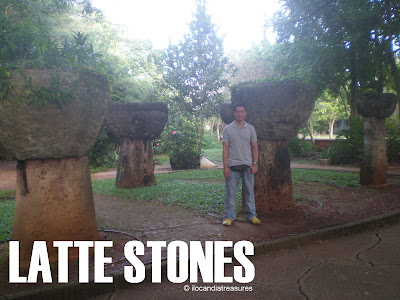 The latte is made of limestone, sandstone or basalt. Pillars range in height of 60cm to 3 meters and narrows towards the top of the shaft. The capstone is a large coral head taken from a reef. The lattes are placed on parallel position with three to seven lattes per row.
The lattes I have seen from the Latte Stone Park in Guam was relocated from the village of Mepo in Fena Valley which was destroyed by a military construction after World War II.
Posted by Edwin Antonio at 4:21 PM