To start the Christmas celebration in Ilocos Norte, a Lantern Parade was held in Laoag City on December 12, 2008. This was on its second year. All of the municipalities and cities of the province participated in and fielded in entries for the competition. 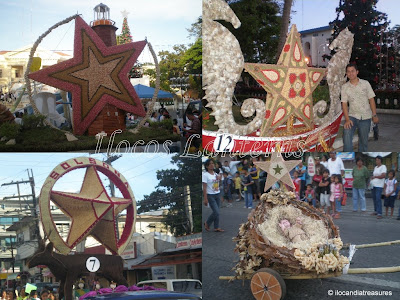 There was a parade of the lanterns as well as floats of the participants. Muses were on board the floats as they were candidates for Ms Tourism as well. The lanterns were created from indigenous materials such as garlic, corn seeds, rice, mongo seeds, bugayong seeds, twigs, leaves, coconuts, bamboos and others. 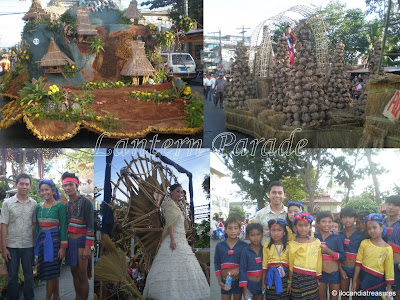 Sea shells were used by the Currimao entry where they created male and female seahorses with a star in between placed on a boat. Burgos town has a star lantern with a miniature lighthouse highlighted with a revolving light bulb. The town of Solsona created a shape of a life-size deer with a star on top of his back. Pinili showcased a lantern made of basket of garlic. San Nicolas featured their damili. Adams' lantern was made of broom. The designers of these lanterns as well as the floats were indeed very creative. Carasi’s float caught my attention since it was a huge one and equally nice. Surely, they exerted so much effort for this.
The ethnic tribes of the municipalities of Adams, Carasi and Dumalneg were also featured in the event. They presented a cultural performance. Booths of the participating municipalities were on display in front of the capitol. Other activities being held were Ms Tourism pageant, abel iloko fashion show, singing competition, fireworks and the awarding ceremony.
Posted by Edwin Antonio at 1:44 PM

Hi! I was wondering if you can give me tips on where to stay in Ilocos Norte and Sur. My siblings and I will arrive there on Saturday (27th) morning and I haven't decided yet if it's best to book a place to stay or find one when we arrive in Ilocos. I'm also not sure how long it will take for us to check out the beautiful places both in Ilocos Norte and Sur. We need to be back in Manila on the 31st for our return flight to Cebu. Any ideas, tips, suggestions? I would really appreciate it. Thank you so much!!!

Hi Doi, sorry i have your message just now. I sent you an email.