The year 2008 was a memorable and wonderful year. It was a year of writing articles and shooting photographs. I covered various events in the local scene. I launched on February this blogsite of mine called Treasures of Ilocandia and the World which features places, traditions, music, festivals, celebrations of life in Ilocos, in the and the rest of the world. I was able to post almost 100 entries. I had 50 posts for Ilocandia Treasures, 35 posts for World Treasures, 22 posts for Festivals, 15 posts for Philippine Treasures, and 8 posts for UNESCO World Heritage Sites. 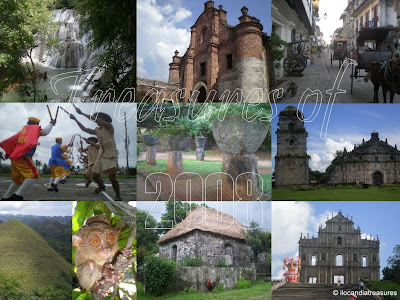 I uploaded several videos on you tube site and embedded these on my blog to support my postings. Empanada Festival video was a big hit. Others on the top ten are the Korean Fashion Show, UNESCO’s , Daklis in Currimao, Dinagyang Festival, Laji: An Ivatan Folk Song, The Guling-guling Dance Showdown, Panagdapil in Ilocos, The Bangui Windmills, and Palu-palo Festival.

Three articles of mine were published in Manila Bulletin broadsheet and Travel Magazine namely:

3. A Journey Down Under

I was lucky to have travels this year locally and internationally. On January, I started it with my trip back to the and this time was in to witness the Dinagyang Festival and made a side trip to . I have titled this entry as First Time Revelry in Dinagyang.

On the month of May, I had a reunion with my Asian friends in and had good time seeing them again. I took a side trip to where I visited some old friends. It was an amazing trip back to Cebu and after 14 years. The sights in Chocolate Hills and the rest of the island remained to be astounding. I have titled this blog entry as Islands Cebu and Revisited.

Then in August, I went for an adventure trip to the captivating for I got the lowest airfare ever. It was a rainy sojourn in the island, nevertheless I enjoyed it since I had great time to experience their culture. I have titled this posting as of Batanes.

Overseas, I had taken my mother to a trip to Macau and . It was birthday treat for her. Never expecting to enjoy also in Hong Kong Disneyland where I thought that was only for kids. I have titled my blog entries as of Macau: A World Heritage and The Hong Kong .

After getting a multiple entry visa to the , I initially visited its territory on the last weekend of November. It was a fantastic island trip since four days was just good enough to see and experience . I have titled this trip as A Taste of America in Asia.

I realized that copying one’s intellectual work was really offensive. I became a victim of plagiarism. It was not only an article being copied but that includes some photos being reproduced without permission. It is my prayer that this will be resolved amicably in due time.

Finally, I was so honored to be awarded the Dr. Martin Posadas Memorial Award as an outstanding alumnus of my Alma Mater Virgen Milagrosa University and later I was invited to be a resource speaker at a leadership training seminar conducted for student leaders of the same university.

Posted by Edwin Antonio at 5:18 AM