Umras To Appease the Spirits

Umras is a tradition in the province of Ilocos Norte. It is a term used to refer to the method of offering ritual of prayers and food for the loved ones who passed away. The locals especially the older people believe that with this practice they are able to help appease the spirits and make them closer to God. It is also a way to honor and remember dead people. 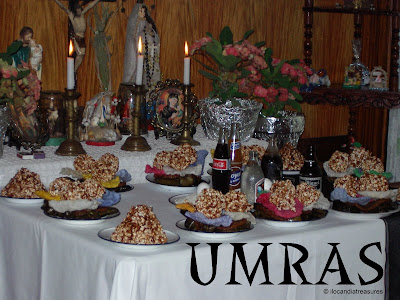 This tradition is usually observed during the first month, seventh month and first year death anniversary and also on All Saint’s Day (Defunturung). The market in Laoag City is full of these items on sale on halloween. Based on my interviews with the elders, there are different components of the umras which comprises the dudul, pilais or pinais, sinuman, baduya, busi or pop rice, balisongsong or patopat, linapet, linga (black sesame seeds), binuelos, gawed, apog, muscada, basi, softdrinks, mamaen or boa, uncooked rice set on a crucifixion form with itlog (fresh egg placed on its top), tabako where the leader of the praying team takes home this rice after the session. 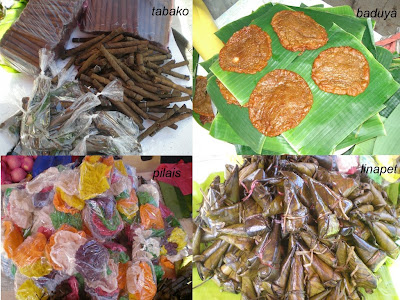 The table where they place the atang is half covered by manto or the black and the other half with white linen. There are 12 plates offered usually filled up with the food. Some would arrange the food in the plate in a tower form. For practicality nowadays, six plates would do. These are arranged in the said table in front of the altar. The prayer is then begun. Some people believe that the atang should not be eaten whereas others enjoy eating it. They vigil the atang or it is being watched or monitored by a person overnight. They remove the atang before sunrise. Some eat a part of the atang and burry in the ground some portions of it. Usually the one who recites litany or leads the prayer is an old woman preferrably a widower.

Thank you for enlightening us Ilocanos who have been raised here in the USA since 1969. I've always wanted to know the tradition of Umras, especially when we will be performing an umras for my dad this coming days. Thank you!

Thanks also Alex for dropping a line. Its good to know that you still keep the tradition. Hoping that this blog has helped you in a way.

Thank you Edwin for responding. It's been since 1969 that I haven't visited my birthplace in Bacsil. God willing, I hope someday. If you are ever here in the USA, specifically in Hollywood, California, please drop me a line...thanks.

Thank you Alex. Thats great.I will be coming back to LA on April because I will fly back home on the 12th. Im in Canada right now.
Please do come back to Bacsil. You were away for so many years.Hope to see you.