When we went to Dos Hermanos Island, I saw some fishermen doing their catch in the waves. They call the fishing as sigay in Ilocano vernacular. These men used bamboo as their fishing pole or tool with some bait at the end of the string. They carry with them rattan back bag or called baki or alat in the local dialect to shell in their catch. 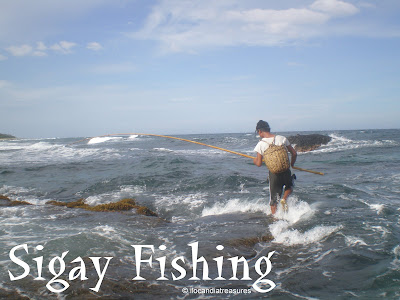 Just to make a documentation out of it, Alaric and I braved the sharp coral rocks to walk through and the splashing waves that made our shorts wet . I was even apprehensive that my camera might drop or get wet. Fortunately, it did not. I had the chance to interact with these fishermen. One of them caught a couple of fish called ap-apukol. He told me that he can instantly catch and sometimes it takes a while.

Posted by Edwin Antonio at 6:11 AM